According to him, Osun under his watch has been stable economically as manifested in the astronomical increase in the Gross Domestic Product of the state since he assumed office. 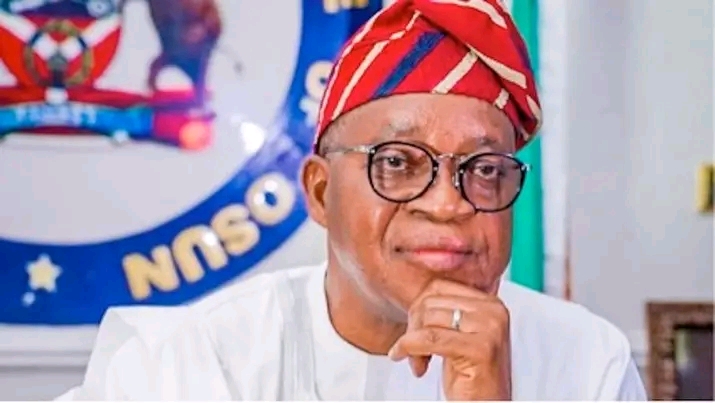 Outgoing Governor of Osun State, Adegboyega Oyetola has revealed that his administation left N14 billion cash in the state’s coffers.
Punch reported that Oyetola also said between 2018 and time of his exit, his administration had paid a sum of N97 billion from the debt inherited, adding that the administration did not take any bank loan during his tenure as governor.
In a farewell message by Oyetola as contained in a statement made available by his Chief Press Secretary, Ismail Omipidan, on Sunday, he further disclosed that his administration put Osun’s economy on a better footing through many people-centred and masses-focused projects implemented to make life worthwhile for the people of the state.
According to him, Osun under his watch has been stable economically as manifested in the astronomical increase in the Gross Domestic Product of the state since he assumed office.
He affirmed that Osun was more stable economically than he met it in 2018, saying despite all the visible socio-economic challenges confronting the state with its attendant effects, he was able to take care of the fears and evil of fiscal indiscipline and lack of implementation, which hampered projects and services in the nation’s public service.
The statement quoting Oyetola further read in part, “As I step aside today( Sunday) following the conclusion of the four-year tenure you freely gave me, I thank God and I thank you for your support, cooperation and prayers over the years.
“I recall how the journey began four years ago; how by your belief in me and your conviction in the plans and programmes of our party, you exercised your right to vote for me. As we end our first term, rest assured that Osun is more stable economically than we met it in 2018 and it remained the most peaceful state in the country under our leadership.
“For four years, we did not take any bank loan facility. But we benefitted from the N3 billion monthly intervention from the Federal Government to all the states for six months to cushion the effect of deductions of budget support facility and salary bailout accessed by the previous administration, just as we have paid N97 billion from the total debt we inherited in 2018.
“We are leaving behind cash of over N14 billion. In addition to the N14 billion cash, another N8 billion is being expected between December and January from our performance in SFTAS and the Internally Generated Revenue. Also, another $72 million will come to the state soon from RAMP 3, NG-CARES, Nigeria for Women Project and Ease of Doing Business. These are earned based on performance. And we have indeed performed to earn them.

“It was part of the same performance that earned us the award of Best Governor on Efficiency of Public Expenditure and TOP Performer on Domestic Revenue Mobilisation by the World Bank’s States’ Fiscal Transparency, Accountability and Sustainability, SFTAS, recently. We have gone this length to let you know that Osun under our leadership was sustainable. It was done through fiscal discipline and personal sacrifices.”
Top Stories