According to Justice Sifawa, a prima facie case has been established against the defendants and therefore they must enter a defence. 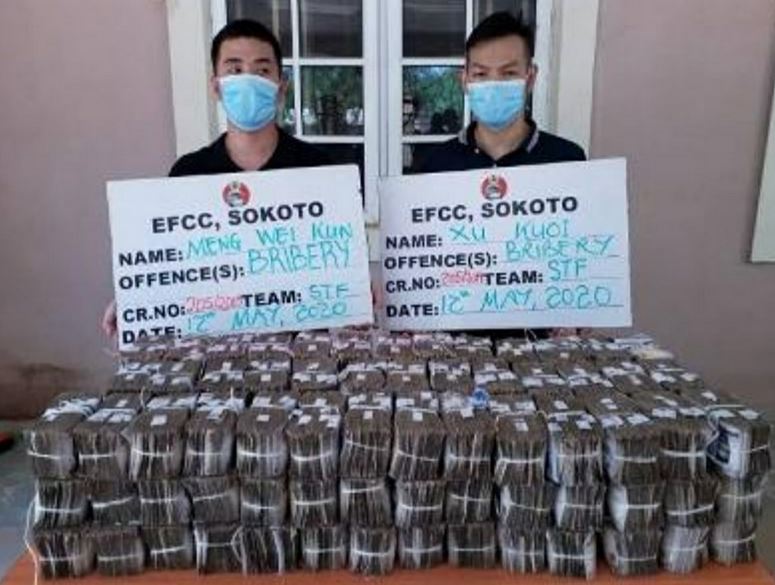 The suspects were arraigned on a two count charge of conspiracy and attempting to bribe one Abdullahi Lawal, former Head of the Sokoto Zonal Command of Economic and Financial Crimes Commission, EFCC.

According to Justice Sifawa,''a prima facie case has been established against the defendants and therefore they must enter a defence".

Meng and Xu, both staff of China Zhongao Nigeria Ltd, allegedly tried using the sum N50million to compromise EFCC’s investigation into the company's conduct in a contract in Zamfara State.

In the course of the trial, the EFCC had called three witnesses and tendered documents which were all admitted in evidence by the Court.

Opening their defence yesterday, counsel to the defendants A.T Hassan called the first defendant, Meng Wei Kun to the stand. But prosecution counsel, S. H Sa'ad raised an objection on the basis of the absence of an interpreter as both defendants had previously claimed they do not speak or understand English language.

Surprisingly, the defendants waived their rights to having an interpreter. Meng testified that he is a staff of China Zhongao Nigeria Ltd, that his company was redesigning a solar water project for Zamfara State Government.

According to the defendant, he was informed by the then EFCC Zonal Head, Abdullahi Lawal to make some refunds through him which was agreed to be done in batches. Meng further testified that five (5) China Zhongao Nigeria Ltd cheques of Ten Million Naira each were cashed from UBA Sokoto branch for the first batch of refund.

Meng Wei Kun told the court that he then informed the then EFCC Zonal Head Abdullahi Lawal that the money was ready for pick-up at the China Zhongao residence in Kasarawa Sokoto. He said, Lawal came alone for the transaction but before it was conducted operatives of the EFCC stormed the premises and arrested both defendants and the N50 Million exhibit.

During cross examination by EFCC counsel, S.H Sa'ad, the defendant confirmed that he knew China Zhongao Nigeria Ltd was under investigation as a result of the contract being executed in Zamfara State.

He equally agreed that he met the then EFCC Zonal Head Abdullahi Lawal but the money in question was not intended as a bribe but part of the earlier agreed refund. Meng Wei Kun was shown a search warrant which he signed during the arrest and recovery of the said N50 Million. He confirmed signing the document but claimed he didn't know what it meant.

Confronted with the five (5) UBA N10 Million cheques each by EFCC counsel, Meng claimed ignorance of the said cheques. He said he was seeing them for the first time.