The native of Awo, Ezinifite in Nnewi South has been linked to different attacks in Ezinifitte, and the entire Nnewi South. 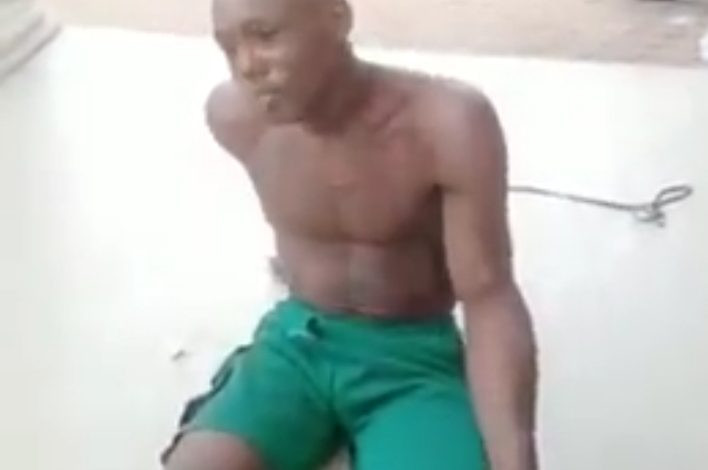 A notorious criminal, Chukwuma Ejionye has been apprehended by members of a local vigilante in Ezinifitte, Nnewi South Local Government Area of Anambra State.
Information gathered revealed that the notorious gunman is a native of Awo, Ezinifite in Nnewi South.
He has been linked to different attacks in Ezinifitte, and the entire Nnewi South.
Confessing to carrying out attacks in the area, Ejionye said;
“I was in Unubi camp, before I moved to Ezinifitte, before going to Agulezechukwu, where I stayed with other members. Then, later I now left the group and escaped, to stay on my own.”
The Nation reported that the suspect has long been on the wanted list of Joint Security Forces working in the State.
Also listing some of the attacks the suspects has allegedly carried out, one of those present at where he was paraded, said;
“He is a known kidnapper who has been responsible for the killing of security men, including vigilante.
“He kidnapped a prominent man and collected N1.5 million before setting him free, but unfortunately for the man, he was dumped in a place where he broke his lungs, and has been under treatment since then.
“JTF has visited his house and recovered guns and security uniforms which he used when he was a security man (he worked as a vigilante operative).
“He has been on the wanted list for a long time and has been one of the reasons Ezinifitte and Nnewi South were regarded as being highly unsafe.
“We got a tip off last night and we moved in and apprehended him where he was hiding.”