The alleged criminals deal in illegally refined petroleum products, according to NSCDC. 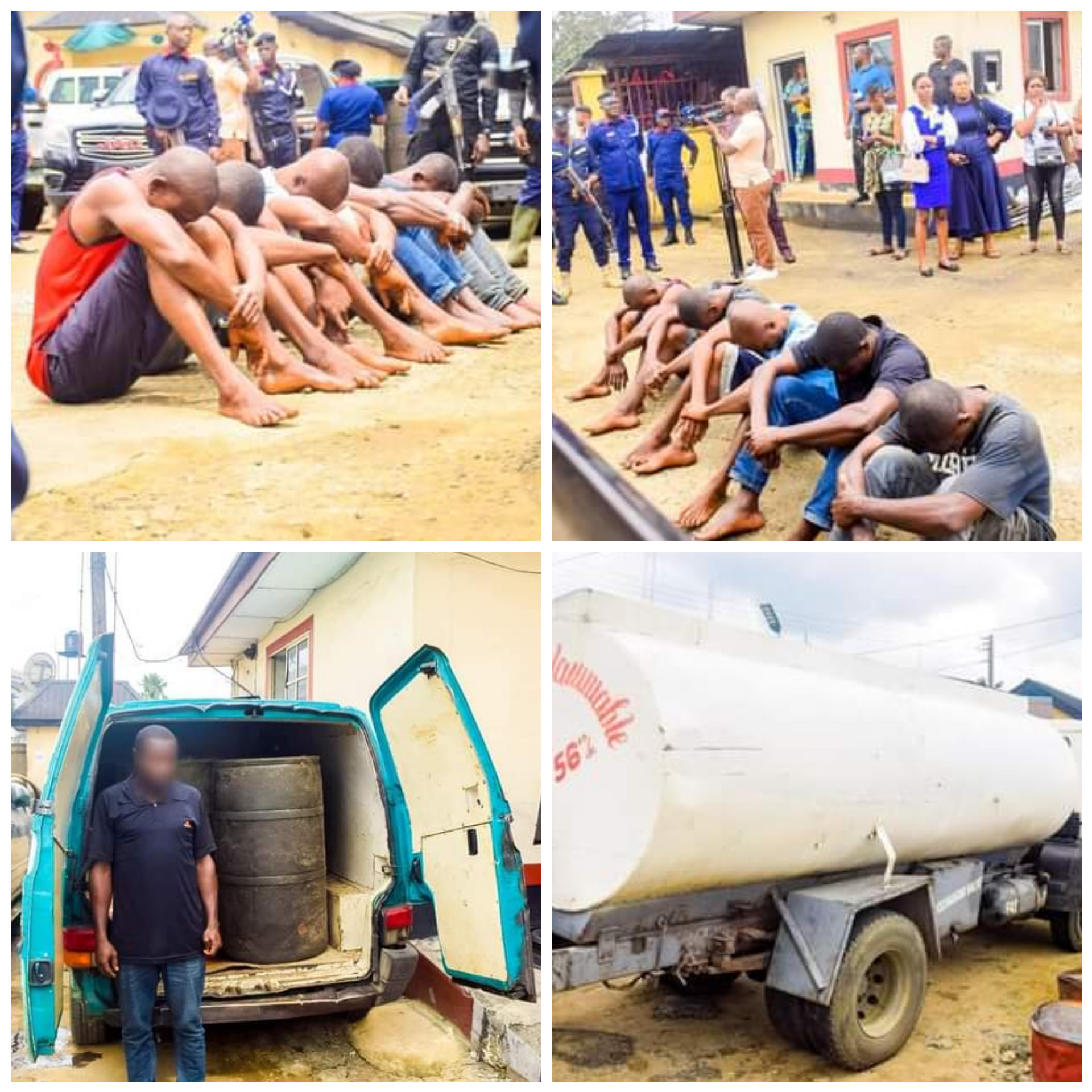 Five suspected oil thieves have been apprehended by the Nigeria Security and Civil Defence Corps,(NSCDC) in Rivers State.
The alleged criminals deal in illegally refined petroleum products.
Parading the suspects, four vehicles and two trucks before newsmen at the NSCDC State Headquarters in Port Harcourt on Monday, December 20, 2022, the corps commandant in the state, Michael Besong Ogar, affirmed that there is no room for illegal oil bunkering activities in Rivers State as perpetrators would be smoked out of their hideouts.
Recall that upon the reconstitution of a new Antivandal Team there has been remarkable successes in the relentless war against vandalism of oil pipelines and illegal dealings in petroleum products as revealed through massive arrests and subsequent prosecution of cases in the court of competent jurisdiction.
Ogar noted that the Commandant General, Ahmed Abubakar Audi, has promised that in a short while there would be a drastic reduction and possible eradication of illegal dealings in petroleum products across the nation as the Corps newly constituted Marine and Land operatives are now taking the Anti-vandalism war to the enemies camp thereby reducing oil theft which is one of the major reason for huge loss of revenue in the country.
"Our major task is to clamp down on the conspiracy theory and massively arrest oil pipelines Vandals and sponsors as we take the Anti-vandalism war to the enemies' domain; the Nation is loosing millions of dollars per barrel due to the increase in Pipelines vandalism and illegal dealings in petroleum products but I can assure you that this menace would be a thing of the past because we are fully committed to the mandate of the Corps' in Safeguarding all Critical National Assets and Infrastructures," he said.
"Barely few days after arresting and parading 19 suspects here at the Command Headquarters; based on credible Intelligence the Antivandal land Patrol team has also arrested 5 suspects for illegal dealings in petroleum products.
"The suspects are charged for contravening the Anti-sabotage Act, the Petroleum Act and the Miscellaneous offences act 2004, laws of the Federation. They are: Ifegbu Uche 'M' aged 42years, Obinna Ogbonna 'M' 42years, Emmanuel Smart 'M' 19 years, Lawrence Gibson 'M' 35years and Emeka Desmond 'M' 35years who were arrested while in conveyance of a total estimate of 24,000 litres of locally/illegally refined Automotive Gas Oil (AGO) loaded in cellophane, concealed in Sack bags and carefully packed in an Ash Colour Toyota Sequoia V8 Jeep- ABUJA GWA 386 GVA, a Light Colour Volkswagen Bus with Registration Number: LAGOS APP 831 XX which was intercepted at Abuloma community in Port Harcourt, a short white Truck DA 1700 Truck with number plate KADUNA XE 653 KA impounded at Abonnema Wharf, and a white Ford E- 250 intercepted at Etche/Okehi road in Etche Local Government Area respectfully
"We also intercepted and impounded another short white Mercedes Tank-Truck with unquantified litres of illegaly refined AGO along Ozuoba-Rumuigbo axis in Obio/Akpor LGA, Port Harcourt Rivers State
"We are very excited that the Court has resumed session as the suspects would definitely have their time in Court while application for forfeitures of the products and mode of conveyance would be made and proceeds be remitted in the federal government coffers,"
Top Stories