Hospital bosses have apologised for "the distress and anxiety caused" to the family. 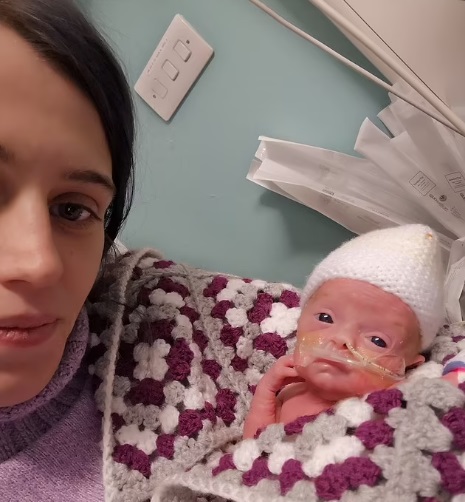 A mother has given birth after following her instinct.
Doctors had wrongly told the mum that her baby had died in the womb.
Hannah Cole, 27, from Wibsey, West Yorkshire, was admitted to the Bradford Royal Infirmary (BRI) after her waters broke early at 20 weeks.
Doctors told her the following day that the baby had died after they could not detect a heartbeat and booked Hannah in for an induced labour.
However, Hannah had a "gut instinct" that her son was still alive so she asked the hospital for one final scan and that was when doctors found a heartbeat again.
Oakley Cole-Fowler was finally born at just 24 weeks and three days on October 30 - weighing 780 grams.
Hospital bosses have apologised for "the distress and anxiety caused" to the family.
Hannah said: "It's been stressful and up and down.
"He was in ICU. He has been absolutely brilliant.
"I'm just relieved. It's been a rollercoaster. He is my Christmas miracle."
Oakley is set to be in hospital until at least his original due date of February 9, 2023.
Little Oakley had an operation when he was just eight days old after being diagnosed with Necrotising enterocolitis, where tissues in the intestine become inflamed and die. He has also had a stoma bag fitted and faces further surgeries next spring.
Hannah said: "Hopefully, we will be able to bring him home in a couple of months.
"I feel a bit lost at the moment because he is not at home."
The young mother explained that while Oakley was once on a ventilator, he is now breathing without any assistance.
She added: "I can't wait to get him home and we can be a normal family."
Hannah has complained to BRI about the treatment she experienced during her pregnancy with Oakley.
Bradford Teaching Hospitals NHS Foundation Trust confirmed an investigation of the events around her scans in October has now concluded.
A spokesman said: "We have concluded our investigation which is now being shared with Ms Cole.
"We would like to send our congratulations to her and her family on the birth of Oakley and wish the family well during his long neo-natal journey."
Top Stories