Recall that Fancy took to Instagram on Thursday, December 29 to publicly apologise to Alexx Ekubo months after she broke up with him and called off their wedding. 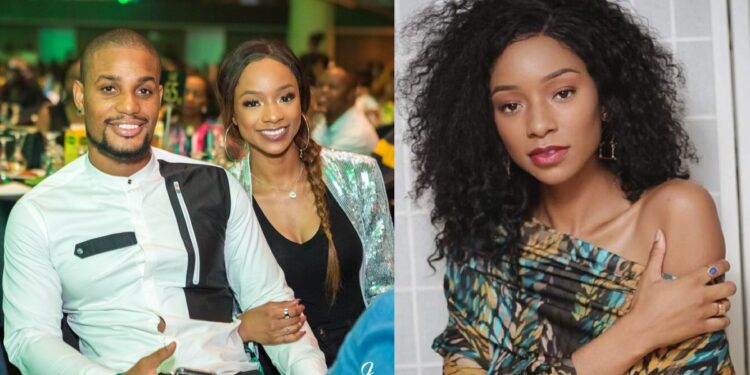 Social media commentator, Dr. Pengking has lashed out at model, Fancy Acholonu after she apologised to her ex-fiancé, actor Alexx Ekubo.
Fancy had taken Instagram on Thursday, December 29 to publicly apologise to Alexx Ekubo months after she broke up with him and called off their wedding.
Fancy announced in August 2021 that she had ended her relationship with the actor and would not be proceeding with the wedding, which was scheduled for November 20, 2021, in Imo State and November 27, 2021, in Lagos State.
However, in an Instagram post last night, Fancy admitted that she still loves and misses the actor and asked him to forgive her for the way she handled things.
Reacting to Fancy’s apology post, Dr. Pengking stated that she probably expected Alexx to remain stagnant; however, the actor has since “built a mansion, bagged a doctorate, and everything started falling into place for him” since their public split.
His words,
“Alex Ekubo’s ex-fiancée, Fancy Acholonu has returned to beg him for forgiveness. She said she has learnt how to handle situations better now. Wow. She probably thought that Alex would remain stagnant when she left. Fortunately, God is not man. As soon as she left, he built a mansion, invested more, bagged a doctorate. Everything started falling in places for him. Who knows whether she was the w1ych stalling his progress. Men, this is why you need to stop grieving over a woman that has refused to be kept . Never cry over a woman. Crying over a woman.
Makes you a weakling and a massive loser. Use that energy to invest in yourself and watch them saunter back. However, never accept them when they come back, for such a woman has already failed the test of time and if the going gets tough in future, she’ll run again. Find a fresh woman instead and build your new world with her. She was probably among the Yas Queen Oloni fans. As Oloni post proposal picture her eyes clear. I hope Alex makes wise decisions.” 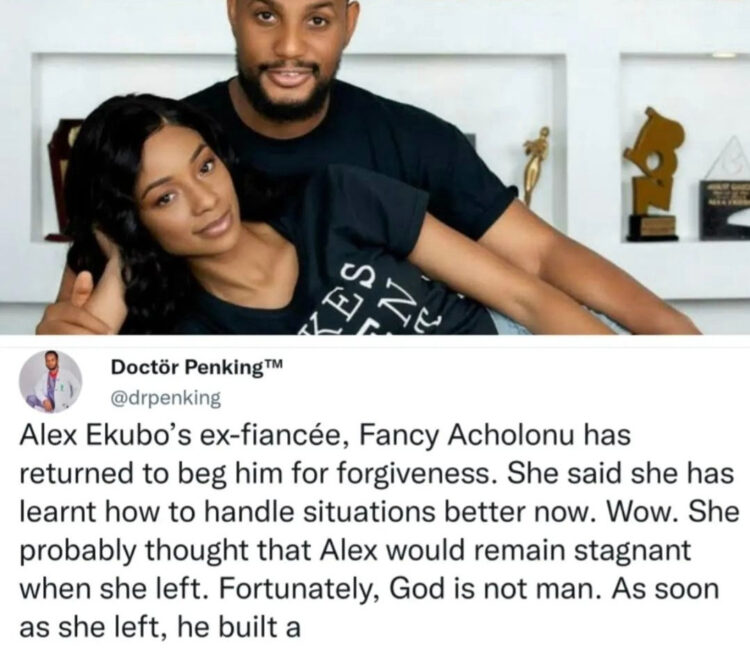 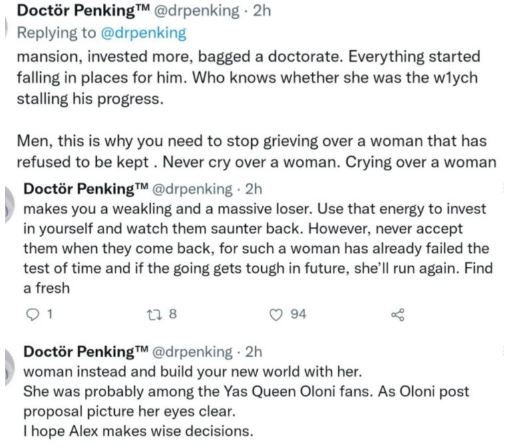