What Serena Told Me After I Defeated Her - Osaka 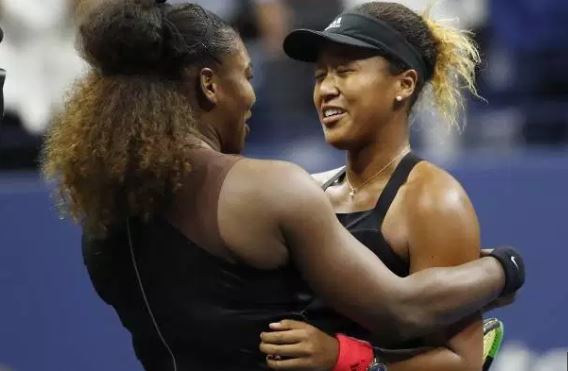 Serena Williams and Naomi Osaka
Naomi Osaka has revealed Serena Williams told her she was proud of her after she claimed the US Open title, Sporting News AU reports.
Osaka, 20, became the first Japanese player to win a Grand Slam with her 6-2 6-4 win over her idol Williams in the final on Saturday.
However, her success was overshadowed by controversy surrounding Williams, who was handed three code violations by Carlos Ramos before accusing the umpire of sexism.
The Arthur Ashe Stadium crowd booed during the trophy presentation, dampening Osaka’s moment.
Speaking on Wednesday, Osaka said she was unsure just why the crowd were booing at the time, but Williams had some kind words for the champion.
“She said, like, she was proud of me and that I should know that the crowd weren’t booing at me,” Osaka told The Ellen DeGeneres Show. “So I was really happy that she said that.
“At the time, I did kind of think they were booing at me ‘cause I couldn’t tell what was going on because it was just so loud in there, so it was a little bit stressful.”
As Williams fell apart, Osaka showed maturity by staying cool to close out her maiden Grand Slam title.
Osaka said she was taught as a youngster to ignore the other side of the court.
“You’re told to just turn around and try to focus so I tried to do that,” she said. “But in my mind, I really wanted to know what was going on.”
Top Stories