Antoine Griezmann is set to leave Athletico Madrid at the end of the season with a move to Barcelona very imminent. 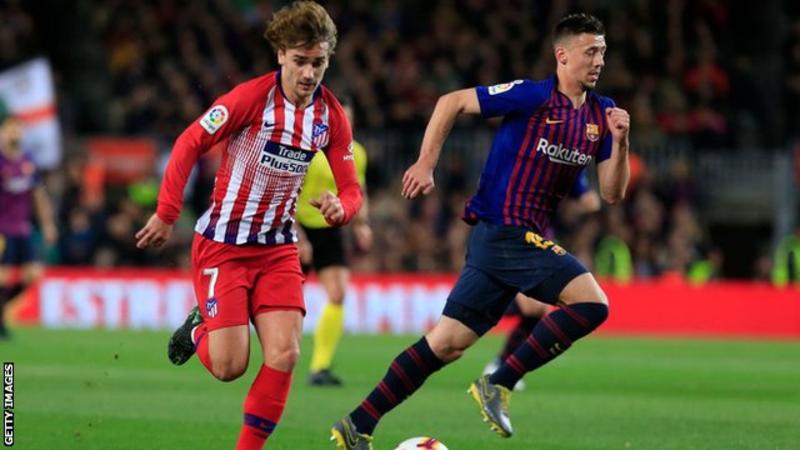 Antoine Griezmann has been heavily linked with a move to Spanish giants Barcelona
Atletico Madrid striker Antoine Griezmann has announced he will be leaving at the end of this season after five years.
The World Cup winner signed a five-year contract last June but Saturday's La Liga match against Levante will be his last for the club.
Barcelona will pay the buyout clause in Griezmann's contract of 120m euros, BBC Sport understands.
"It's been an incredible five years. Thank you for everything," he said.
"I wanted to tell the fans who have always given me a lot of love that I have taken the decision to leave, to see other things, to have other challenges," the 28-year-old added, in a video posted on Twitter.
"The truth is it has been difficult to take this route but it is what I feel I need and I would like to thank all of you for the love you have shown me during these five years."
The Frenchman has scored 133 goals in 256 appearances for Atletico since joining from fellow Spanish outfit Real Sociedad in 2014.
He has won the Europa League, the Spanish Super Cup and the Uefa Supercup during his time at Atletico and has been the team's top scorer in each of the last five seasons.
Griezmann rejected an offer from Barcelona last year and revealed his thought process in a documentary called 'The Decision'.
Atletico also reported Barcelona to Fifa over an alleged illegal approach in December 2017.
Griezmann will be the third high-profile player to leave Atletico this summer after defender Lucas Hernandez agreed to join Bayern Munich and long-serving captain Diego Godin announced he would leave, with his contract set to expire.
***
Source: BBC
Top Stories