Panic As Pope Francis Gets Stuck In An Elevator


There was a bit of apprehension on Sunday as Pope Francis got stuck in an elevator. 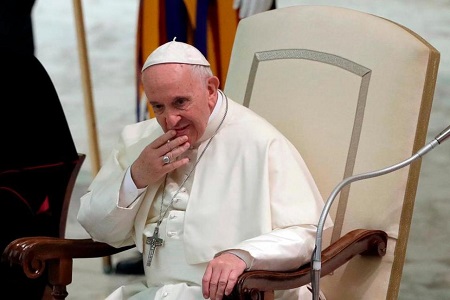 Pope Francis
Pope Francis has been rescued by firefighters after he got stuck in an elevator for 25 minutes, ahead of his weekly address on Sunday.
Francis apologised to crowds gathered in St. Peter’s Square, Vatican City on Sunday, after showing up late for his weekly address.
Addressing the crowds, he explained: “Dear brothers and sisters, good morning. First of all, I have to apologise for being late but I had an unexpected event, I have been stuck in an elevator for 25 minutes.”
The Pope said that there was “a drop in voltage,” and that the elevator stopped.
“Thank goodness, the firemen arrived, and I thank them so much, and after 25 minutes of work they managed to get it started again,” he said.
“A round of applause for the firefighters!” he added.
CNN
Top Stories