How A 'Yahoo Yahoo Academy' Thrived In Akwa Ibom


New revelations have been made about the fraudsters found in a 'yahoo yahoo academy' in Akwa Ibom state. 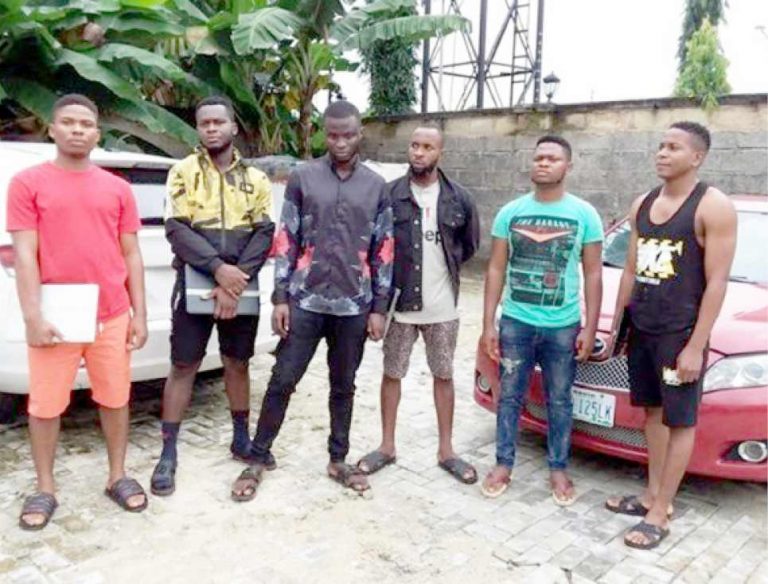 Suspected ‘Yahoo boys’ who were arrested

The ‘Yahoo Academy’ busted by operatives of the Economic and Financial Crimes Commission (EFCC) in Essien Essien Street, Ikot Ibiok village in Eket Local Government Area of Akwa Ibom State was located in a serene environment.

The street housing the four-bedroom compound where the suspected ‘yahoo boys’ were arrested is a quiet, unassuming area, with an untarred road inaccessible by cars. In fact, many residents and business owners in the vicinity never suspected that an ‘academy’ was operating in that area until the arrests were made.

The suspected ‘yahoo boys’ were said to have maintained a low, unsuspecting profile by keeping to themselves and not relating with neighbours. Our correspondent gathered from one of their neighbours that they were mostly indoors and only came outside when they knew that no one was watching or around to see them.

Another neighbour explained that since the compound where the suspected ‘yahoo boys’ lived was fenced round and had a gate that was always locked, it was difficult to get access into the facility.

Mr Basil John, a next door neighbour to the house where the suspected ‘yahoo boys’ lived, said about 7 months ago, the house was renovated after its owner moved out because armed robbers terrorised the area. He said after the renovation, he noticed that about 8 boys moved into the compound and lived as recluse, never interacting with anyone, which made people suspicious.

According to him, their lifestyle made it difficult for people to communicate with them, which possibly led to the suspicion that culminated in their arrest. He stated that though the exact number of occupants in the house was unknown, the later influx of people into the compound revealed that many lived there.

He said, “The suspected ‘yahoo boys’ have lived there for about seven months. The people staying there before left and leased out the compound, and all of a sudden, we saw renovation going on in the house.

“I had the opportunity to see them the first time they came in because they were many. The first day, I saw 8 persons, but we didn’t know they were up to 20 in the house.

“They buy things in bulk and keep inside, so they don’t really have need to come outside. They were just minding their business. Maybe the EFCC got information about them; but they did not constitute nuisance.

“People in the neighbourhood suspected them; it was quite obvious because they were staying inside the house and were reserved. They always locked the gate 24 hours every day. You rarely see them come outside, their generator was always on 24 hours and they were not relating with people.

“If you are staying in an environment and not relating with people, it will be quite obvious. The house is a four-bedroom apartment, so we knew the number of people staying there were many.’’

Narrating how the suspected ‘yahoo boys’ were arrested, John said the EFCC raided the house by 2am and left by 5am, adding that he was outside watching how the arrests were made.

He told our correspondent that when the EFCC arrived they could not gain easy access into the compound because the gate was locked, and they met a stiff resistance from the suspected “yahoo boys.’’

He said the EFCC entered the compound using a ladder and sledgehammer to break the iron windows before they could gain access into to the house.

He said when the EFCC entered the house, some of the suspected yahoo boys tried to escape by entering into the ceiling, but they were fished out.

He noted that it was impossible for them to escape because the compound was fenced round. He, however, believed that one of the suspected ‘yahoo boys’ who was not available when the arrests were made escaped.

“The EFCC came in the night, about 2:00am and left by 5:07am. I was here and saw everything that happened. When they came, the boys refused to open the door, they resisted.

“I am not quite sure how the EFCC got inside the house, but I saw them carry a ladder when they were leaving. It seems they used a ladder to enter the compound and used a sledgehammer to break the iron window. Though most of the boys climbed into the ceiling, the EFCC removed all of them. The whole compound is fenced round, so escape was not possible.

“I am not sure they picked everybody. I think one person escaped, but I am not sure if the person slept at home or not. More than 20 of the boys were in the bus, though I didn’t count them one by one. The EFCC came with two coaster buses and the boys filled them,’’ he said.

Investigations showed that people in the vicinity never knew an academy was operated in the house. In fact, when our correspondent visited the area, the gate of the compound was locked, making it impossible to access the house.

However, it was learnt that after the arrests, over 20 tables and chairs were found inside the house, giving an indication that a school was actually operating there. The EFCC was said to have taken away laptops and phones during the operation.

According to John, “After the EFCC left with the boys, there were a lot of tables and chairs; it was more or less a school setting. Over 20 tables and chairs were left when the ‘yahoo boys’ were arrested.’’

When Daily Trust on Sunday sought to know the identities of the suspected ‘yahoo boys’, John said “most of them were Igbo.’’

Further information gathered from the EFCC zonal office in Uyo revealed that investigations were still ongoing and the  boys would soon be charged to court as they were said to have made useful statements. They said none of the suspected ‘yahoo boys’ escaped during arrests or from their custody, adding that since their Uyo facility was too small to accommodate all the suspects, some of them have been moved to Abuja pending when they will be taken to court.

They said the operation in Eket was a joint one between operatives in Uyo and Abuja office.