Woman Found Guilty Of Lying That She Was Gang-raped


A British woman has been found guilty of lying that she was gang raped by a group of Israeli teenagers while on a working holiday in Cyprus. 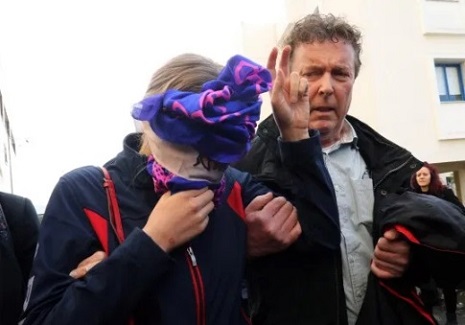 A court in Cyprus on Monday found a British woman guilty of falsely claiming she was gang-raped by a group of Israeli tourists in the holiday resort of Ayia Napa.

Sentencing was adjourned until January 7.

The woman, who was 19 at the time of the incident in July, had pleaded not guilty to the charge of “public mischief”, which carries a sentence of up to one year in prison and a fine of around 1,700 euros.

“The statements you have given were false,” the judge told the defendant in remarks translated by the court interpreter.

She appeared frustrated by the delay to the sentencing, telling her lawyer: “He already made his decision! I thought we were asking for a fine.”

More than a dozen women from an association for the protection of women attended court wearing white scarves with an image of lips sewn shut printed on them.

The woman’s lawyers had claimed she was pressured into signing a statement written by a detective.

The judge said during the trial that police had acted properly at all times, with no pressure exerted to change the woman’s mind about her initial claim she was raped by 12 Israelis on July 17.

The Israelis, aged 15 to 18, were released without charge the same month after the woman was arrested on suspicion of making a false statement.

Rights groups argued the teenager has suffered humiliation and been mistreated by the police and media.

They have called for an investigation into police handling of the case and criticised the way rape cases and victims are treated in Cyprus.