Whyte has looked mostly poor in his fights with Dereck Chisora, Joseph Parker and Oscar Rivas. He could lost to all three of those fights if the referees that worked those contests had been on the ball. 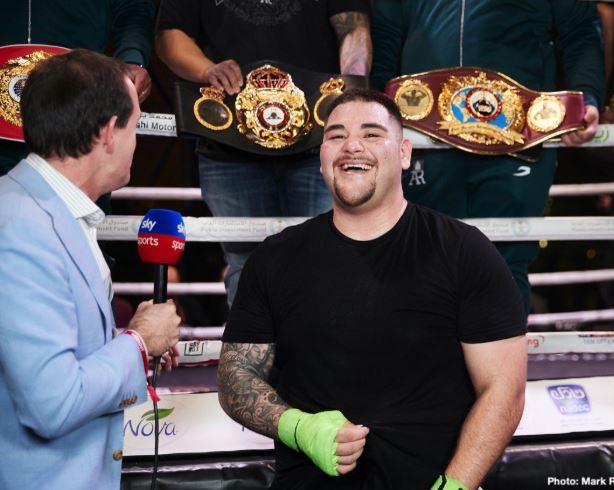 This would be a risky move by Hearn, because if Ruiz is in shape, he likely dominates the sluggish, easy to hit Whyte. On paper, this is an easy fight for Ruiz, as long as he’s in shape. But will all the money that Ruiz made in his two matches with Anthony Joshua, his desire to train may no longer be there. If he comes into a fight with Whyte weighing in the 280s, he’ll likely lose.

Whyte has looked mostly poor in his fights with Dereck Chisora, Joseph Parker and Oscar Rivas. He could lost to all three of those fights if the referees that worked those contests had been on the ball.

The seven-figure offer from Hearn to Ruiz could mean anything. It could be $1-2 million or could be as high as $7 million. Given all the money Ruiz has made in his 2 recent fights against Anthony Joshua, it’s hard to imagine him agreeing to fight Whyte for anything less than $7 million, especially with Hearn wanting the fight to take place in the UK.

Some of the officiating in Whyte’s fights with Joseph Parker and Oscar Rivas left a lot to be desired. We Whyte get credit for a head-butt knockdown of Parker. In his fight with Rivas, the referee stopped the action suddenly in the 11th after Whyte had been hurt by a body shot. The referee mistakenly thought it was a low blow, and he let Whyte recover. Ruiz likely won’t want any part of fighting Whyte in the UK after seeing those fights.

“Sources: Eddie Hearn made a seven-figure offer to Andy Ruiz Jr., for a fight with Dillian Whyte to be staged March 28 or early April in the U.K., on DAZN,” said @MikeCoppinger. “Ruiz, of course, lost his heavyweight championship to Anthony Joshua in December. Whyte beat Mariusz Wach on undercard.”

Whyte (27-1- 18 KOs) is already the mandatory for WBC heavyweight champion Deontay Wilder, but he won’t get a crack at his title until 2021.

In the meantime, Whyte has a lot of free time in 2020 to continue to fight, and Hearn wants to put him in with a good heavyweight. Whyte has struggled recently against Mariusz Wach, Oscar Rivas, Dereck Chisoroa and Joseph Parker. None of those matches were easy ones for Whyte.