Teenager Murders Girlfriend, Burns Her Body After Arguing About Her Being Pregnant (Photo)


A teenage boy has found himself in serious trouble by murdering his girlfriend after an argument. 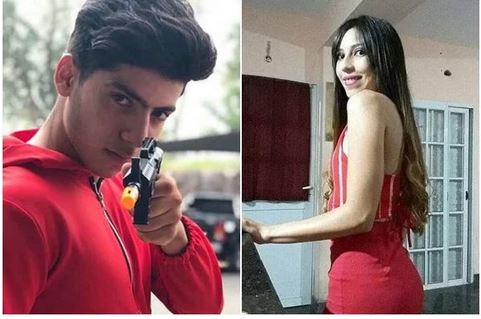 Naim killed his girlfriend, Brenda Micaela Gordillo
A 19-year-old man has been arrested after he confessed to killing his girlfriend. He also attempted to burn her body to cover his tracks during an argument about her being pregnant.
The Argentine identified as claimed he had pushed his 24-year-old partner Brenda Micaela Gordillo down the stairs after a night out before attempting to burn her body on a grill.
Her remains were found in a dumpster at the side of a road, though an autopsy later revealed that she was not pregnant.
The pair had returned to their apartment in Catamarca, a northwestern province of Argentina, at around 4am on Saturday, newspaper Clarin reports.
Naim told the police he had a row with Brenda and after she fell down the steps he wrapped her body in a blanket before trying to burn it.
Officials have not confirmed whether Brenda was alive when her boyfriend burned her body, however, forensic experts believe she died by asphyxiation due to cloth placed in her mouth.
A piece of Naim’s skin was also found under Brenda’s nail, suggesting she struggled with Vera before she died, according to investigators.
Hugo Costilla, a prosecutor for Catamarca, told Argentine state news agency Télam that the victim was not pregnant and Vera had not chopped up her body, despite reports in some media.
Vera’s father and lawyer went with him to the police station at around midday when he handed himself in, though Mr Costilla confirmed the teenager did not have any assistance in the alleged murder.
CCTV footage shows the moment Naim Vera was driving his truck at 8.10am on Saturday along a road where part of his partner’s body was later found half buried. The authorities believe he was driving back home after discarding Brenda’s remains.
Part way through the journey he was stopped at a police checkpoint and asked to produce the vehicle’s documents before he was allowed to continue.
He is understood to have then returned to the apartment and called a lawyer friend and his father and confessing to both what he had done.
Top Stories