A woman from Brazil, Jaqueline Alarcão has caused a stir on social media after her 'teeth transformation'. 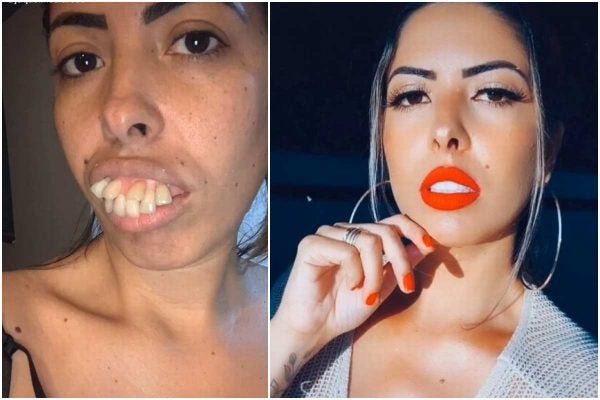 Jaqueline Alarcao
A woman who shared a video of her amazing teeth ‘transformation’ and got millions of views has caused controversy after revealing it was all fake.
The video she shared on Tiktok showed Jaqueline Alarcão from Brazil jumped showing her to have crooked and overlapping teeth which protruded from her mouth to having a set of pearly whites most people dream of.
She captioned the clip: “Before and after I married a dental surgeon.”
The post went viral, as it gathered millions of views and over 10,000 comments, cosmetic surgeons and beauty professionals even shared it on their social media channels to praise the work.
As the video went viral, some claimed it was impossible, as they pointed out that it must be a fake. This led to an online ‘war’ as many brushed aside the observations.
Turns out the skeptics were right, as Jaqueline Alarcão posted a follow up video showing herself using the prop before revealing her real smile with the caption:
“I managed to troll you guys!”
After duping millions of viewers, Jaqueline has since posted a string of videos featuring the false teeth.
Top Stories