People have been warned that a new symptom that could indicate that one has coronavirus has been found. 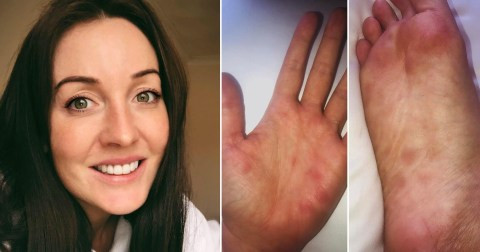 Sarah Churchill
A woman who suffered unexplained rashes on her hands and feet which left doctors surprised and was later diagnosed with coronavirus has now revealed she was one of the first people in the UK to catch the virus.
It has now been revealed that the rash could be symptoms of the disease that has killed hundred of thousands of people worldwide.
36 year old Sarah Churchill, first went to her doctor with a rapid heartbeat and shortness of breath towards the end of February, when there were only 15 cases in Britain.
She didn't have fever or persistent cough so it was thought the painful rashed could be a sign of blood cancer or even HIV. But medical tests showed no ailments and it was not until months later that she was told she had contracted coronavirus.
A Covid-19 tracker app has been created and Professor Spector, one of the experts behind it on Thursday suggested new and unexplained skin rashes could be a potential symptom of the virus after a number of users reported developing them.
Sarah, a mum-of-one, from Bournemouth in Dorset, said: ‘It never crossed my mind I might have got coronavirus.
‘It’s fascinating and horrible how many different symptoms there are. ‘I never thought I had Covid-19 at all. They haven’t made it an official symptom, so there could be people out there with the coronavirus who have no idea.’
Professor Spector, of King’s College London, said of skin rashes: ‘It’s usually in combination [with other symptoms] but it can come on at different times — sometimes after the other symptoms. ‘It can come two weeks after the other symptoms, or two weeks before. It’s just being missed because the public is unaware of it and doctors are unaware of it.’
According to the professor, rashes had previously been documented in early cases reported in China and Europe but no studies have so far been published.
The rashes are ‘displaying in very unusual ways’, he added, describing how they ‘present like an allergic rash’ or drug rash rather than eczema.
‘It is an unusual rash in people who don’t normally get rashes. That is the key thing. It can just last for a day and disappear, so people have got to be quite vigilant. Other people get it for a long time.’
Top Stories