Oh No! See What Has Happened To Kano Singer Since He Was Sentenced To Death For Blasphemy


A young musician who was sentenced to death by a court in Kano for blasphemy has been in chains in an underground prison. 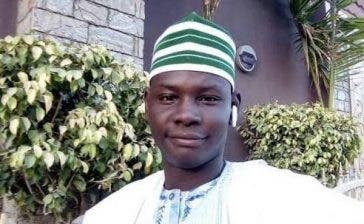 Yahaya Sharif-Aminu
More details about the ordeal of a 22-year-old singer , Yahaya Sharif-Aminu sentenced to death for blasphemy against Prophet Muhammad have been made public.
According to latest report by Sahara Reporters, the musician is allegedly chained in an underground prison in the state.
He is said to be held incommunicado.
Sharif-Aminu, was on Monday sentenced to death for committing blasphemy against the Prophet of Islam in a song he circulated via WhatsApp.
He was accused of committing the offence in March 2020 after which protesters burnt down his family house.
He has 30 days to appeal the judgment.
“They are keeping him in the worst possible condition. They have denied him visitors including his immediate family. He has been kept in a solitary confinement cell known as Back Cell at the Kano Central Prison. The cells are dark and underground.
“They boy may get infected where they are keeping him or exposed to cold. They have put a leg chain on him since he got in and he sleeps with the leg chain,” a prison official told SaharaReporters.
Several Nigerians have condemned the judgment of the Upper Sharia Court in Kano.
The Socio-Economic Rights And Accountability Project asked the Nigerian Government to immediately quash the death sentence, saying it “amounts to violation of the right to freedom of expression”.
Reacting to the issue, rights lawyer, Tope Akinyode, described the death sentence as “preposterous” and “antithetical to democratic tenets”.
Top Stories