Citizens violating the facemask rule have been arrested and forced to lie in a coffin as punishment. 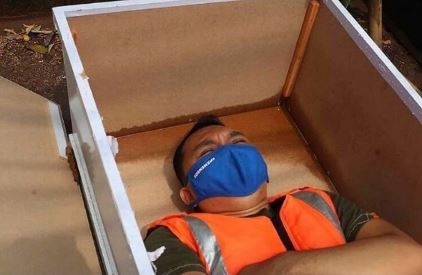 People forced to lie in a coffin for disobeying facemask rule
Many people have been forced by the police to lie inside coffins for refusing to wear a face mask in public.
It was gathered that the offenders were given the option of laying down in a coffin instead of paying a fine or doing community service in Jakarta, Indonesia.
However, since the punishment began, many people have criticised it forcing the government to order police to stop using the harsh punishment for people who refuse to wear face masks.
The punishment saw those caught not wearing mask given the option of community service, a fine, or laying down in a fake coffin.
Those caught in Pasar Rebo, East Jakarta, were told to "contemplate" the potential health risk from their mistake by laying down in the coffin for several minutes on Wednesday and Thursday.
Santoso, the deputy head of Pasar Rebo subdistrict, claimed that the offenders had voluntarily opted to lay in the coffin rather than pay the fine or get community service.
“If they chose social work, they had to clean public facilities for at least one hour. When I asked why they didn’t pay the fine, they replied they didn’t have the money,” Santoso told Kompas news website earlier this week.
The controversial punishment was lifted yesterday (Friday) amid mounting criticisms.
East Jakarta public order agency head Budhy Novial said he had reprimanded the officers and told them to punish people not wearing masks according to the current regulations.
“I’ve reprimanded the officers [who imposed the fake coffin sanction] and urged them to punish violators according to the current regulations."
He said he hoped the fines and social work punishment would be sufficient to make residents stick to the rules to curb COVID-19 transmission.
Other districts in Jakarta have built mini coffin monuments that feature the death rate data to raise awareness about coronavirus.
According to the Jakarta Post, Indonesia is among the countries with the highest death rate among children, surpassing the United States as one of the world's worst-hit country by the pandemic. 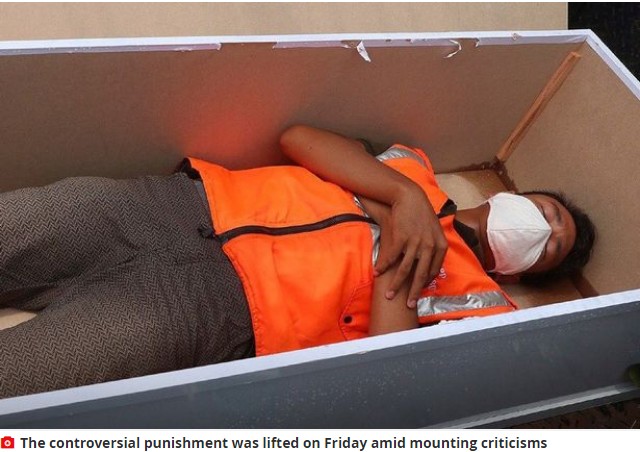