A photographer has shared a rather touching and shocking story how his friend died of HBP at 25. 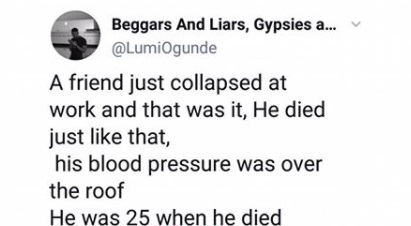 A Nigerian photographer has shocked Twitter users after narrating story how his friend died of High Blood Pressure at the age of 25.
The man with the Twitter handle @LumiOgunde, said his friend collapsed at work and died shortly after. He went on to advise his followers to rest while "trying desperately to escape poverty by working".
He tweeted;
A friend just collapsed at work and that was it, He died just like that, his blood pressure was over the roof He was 25 when he died No rest you hear.
While you're trying desperately to escape poverty by working, sometimes overworking, Remember that if you drop dead, that's all, game over. Those dependants will either suffer more or move, Your parents if they are alive will also suffer not just mentally.
Top Stories