This followed the location and recovery of the bus by divers brought into the state from neighbouring states to aid in the search and rescue of the victims. 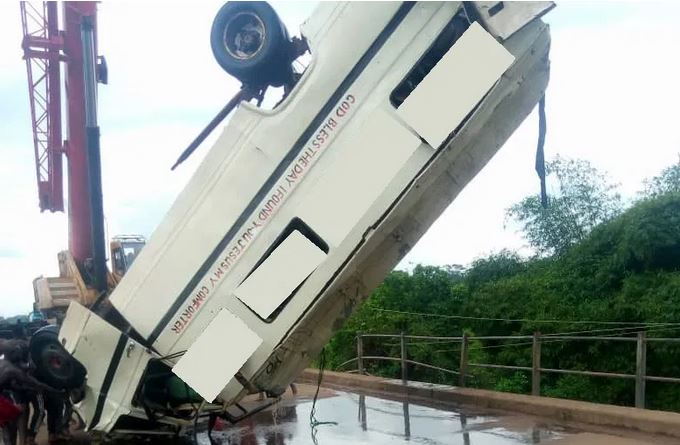 Bus recovered from the river where 13 bodies were recovered.

According to a report by PREMIUM TIMES, a total of 14 bodies have been recovered from the Akaeze-Ukwu River in Ebonyi State, site of the fatal accident which occurred on Friday night.

This followed the location and recovery of the bus by divers brought into the state from neighbouring states to aid in the search and rescue of the victims.

PREMIUM TIMES reported how a bus carrying over 30 passengers plunged into the river along the Akaeze-Ishiagu expressway, Ivo local government of the state.

Five of the passengers, who were returning from a burial, were rescued and taken to hospital on Friday.

However, one of them died at the hospital while the others are reportedly still unconscious.

The chairman of the local government, Onyebuchi Ogbadu, confirmed the recovery of the extra 14 dead bodies on Saturday.

According to him, the state government had to bring in divers from Rivers and Cross River states to help in the search of the bus.

“The divers were able to locate the bus and pushed it up to enable the crane to pull it out,” he said.

The chairman said they are still searching for the remaining passengers aboard the bus.

“The driver said he was carrying 32 persons on the bus so we are still looking for about 13 or more persons.”

Mr Ogbadu said the driver was able to dive out of the bus as it was plunging into the river and was one of those rescued on Friday.

The police spokesperson, Loveth Odah, said seven of the bodies recovered are male while seven are female

She said among the five victims rescued is the driver of the coaster bus with Reg no. UKP 78 XA, identified as Nwaonu Chinedu, a native of Ikwo local government of the state.

She said the victim who died Friday is a female who is yet to be identified.

“The female victim was confirmed dead by a medical doctor on arrival at Dennis Hospital Akaeke in the Area.

“The driver narrated that he conveyed 32 members of the Christ Peculiar Church of Nigeria Enugu State branch to attend a burial ceremony at Nguzu Edda in Afikpo South LGA of the State”.

“14 corpses have been recovered (7 female and 7 male) together with the 608 vehicle.

“The corpses have deposited at Martha Memorial hospital mortuary AFIKPO preservation,” she said.

Ms Odah said among those in the vehicle who are still being searched for is a retired superintendent of police, Livinus Mbah.

“He urges road users to avoid speed/reckless driving especially in this ember months”, she added.