Leicester City has gone top of the Premier League after beating Chelsea in an epic encounter. 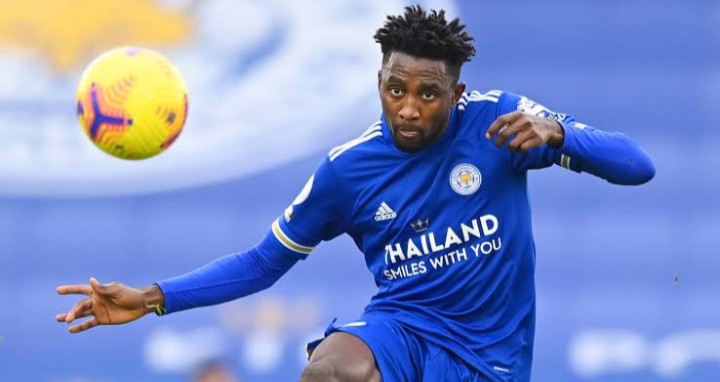 Ndidi
Nigerian footballer, Wilfred Ndidi registered a goal against Chelsea to help his team, Leicester City moved to the top of the Premier League table.
The Foxes knew a win would see them overhaul Manchester United and they were on their way after only six minutes when Wilfred Ndidi fired in off the inside of the post from 20 yards.
Chelsea rarely threatened, although they were denied a first-half penalty by VAR when Christian Pulisic went down under a challenge from Jonny Evans, only for the technology to confirm the offence took place just outside the area.
Lampard's misery was swiftly reinforced as Leicester City broke clear to add a second four minutes before the break, James Maddison sweeping a cool finish past Chelsea keeper Edouard Mendy on the half-volley from Marc Albrighton's pass.
Chelsea barely raised a gallop after the break and it was Leicester who created the better openings as James Justin headed wide when unmarked and Mendy saved from Youri Tielemans.
Leicester are now a point ahead of Manchester United having played a game more while Chelsea are in eighth, five points off the Champions League places.
Since beating Leeds to go top of the table in December, Chelsea have taken just seven points from their last 24 available in the Premier League.
Make no mistake - Chelsea manager Lampard is under increasing pressure after another dreadful performance on a night they could have used to show signs of recovery against an in-form side.
Instead, this was a wretched affair lacking any spark and urgency, and more significantly desire, with Leicester closing out the win with barely a moment of anxiety all night.
Chelsea were sloppy in midfield, toothless in attack and soft in defence, falling asleep at a free-kick and a corner for Leicester's first from Ndidi then being undone by a routine angled pass from Albrighton.
The body language was resigned, with not the hint of a second-half revival, while there will also be renewed scrutiny on Lampard's transfer policy.
Timo Werner, for all the consoling words heaped upon the £47.5m signing by Lampard, only started on the bench while £71m summer capture Kai Havertz was a non-existent presence on the pitch - it was no surprise when he was replaced in the second half.
Lampard will be well aware of the reality of his situation. He will know his background as a Chelsea great will not spare him from judgement by owner Roman Abramovich.
He must hope the fact that Chelsea are not yet adrift of the Champions League places will give him more time but given a summer expenditure of more than £200m, performances as poor as this will only turn up the heat on the manager.

The Foxes go 1-0 up against Chelsea courtesy of a brilliant long-range strike from their Nigerian midfielder.