Government’s bulldozers, it was gathered, moved to the premises between 2:25am and 4:20am to pull down structures. 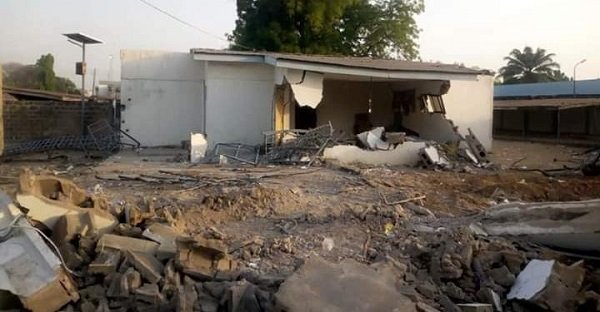 According to a report by The Nation, the Kwara State Government yesterday demolished the remaining structures and property on the disputed Dr. Olusola Saraki’s land (Ile Arugbo).

This is coming just a few hours after a court judgment struck out a suit by Asa Investments Ltd, claimants to the disputed land.

Government’s bulldozers, it was gathered, moved to the premises between 2:25am and 4:20am to pull down  structures.

Reacting to the development, the legal team of the claimants described government’s decision to carry out a fresh demolition on the property, whose matter is still in court, as reckless and illegal.

Lead counsel to Asa Investments Ltd Dr. Akin Onigbinde (SAN) said in a statement that he was surprised that less than 24 hours after the court fixed March 17 for hearing of the counter-claims filed by the Kwara State Government, the government ordered bulldozers to go to the property about 2:25am and 4:20am on February 3 to further demolish structures and materials on it.

He added: “Counsel to the Kwara State Government, according to the record of the court at previous sittings of the court had given an undertaking not to destroy the property until the dispute is determined.

“It was also surprising that on a day the court granted an application to Asa Investments Ltd  to substitute the name of Alhaji Sanusi Baba-Eleku, a co-claimant with Asa Investment Ltd, who died recently, with another, being Alhaji Abubakar Oluwatoyin, and before allowing the new party to file his witness statement on oath as required by law, it struck out the case of Asa Investment Ltd without allowing the new party the opportunity to even put forward his case to court for adjudication; and Kwara State Government overreached judicial process to further destroy the property during the pendency of hearing.”

He noted that the state government, by its action, has violated the undertaking it made in open court in previous sittings not to interfere with the property.

“This action taken in the dead of the night will be challenged. We will not allow a government which should symbolise democracy and rule of law to act with impunity or seek to subvert the course of justice,” Onigbinde added.