Panic As Engine Of Boeing Plane Catches Fire, Explodes Mid-air Before Falling Off In the US (Photos+Video) 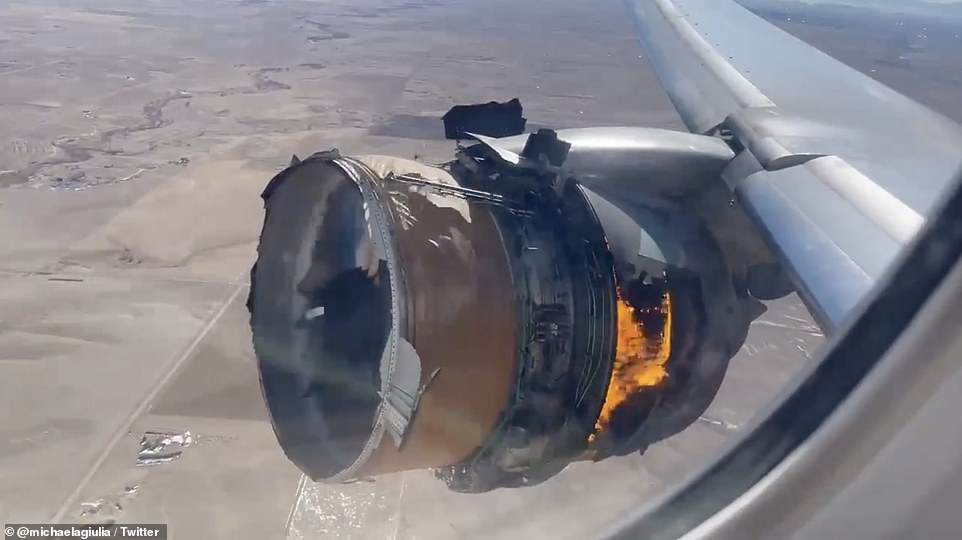 Boeing plane catches fire
Many people inside a Boeing 777 plane were left panicking for their lives after the plane's engine caught fire mid-air.
The incident on Saturday left passengers terrified.
The engine it was gathered caught fire at 15,000ft and terrified passengers watched a fire rage below the aircraft's wing.
The United Airlines flight bound for Hawaii was forced to make an emergency landing shortly after taking off from Denver when it suffered major damage to one of its engines.
The pilot can be heard in a mayday call asking air traffic control for permission to immediately turn the aircraft around, before he made a safe 'textbook' landing.
Video recorded by passengers aboard Flight UA328, which was carrying 231 travelers and 10 crew members, shows the engine engulfed in flames.
Passengers have described feeling the heat from the fire and many believed they were just moments dying. Miraculously, there were no reported injuries either on board or on the ground.
One homeowner in the Denver suburb of Broomfield, Colorado told KMGH-TV they were making a sandwich in their kitchen when debris crashed through their roof and landed just two feet away.
The Boeing 777-200, which was scheduled to fly to Honolulu in Hawaii, diverted back to Denver and landed safely at 1.30pm local time, about 30 minutes after takeoff.
The 26-year-old 777 was powered by two Pratt & Whitney PW4000 engines. Investigators will focus on what caused the engine on the plane to fail and will look at whether a fan blade failed. 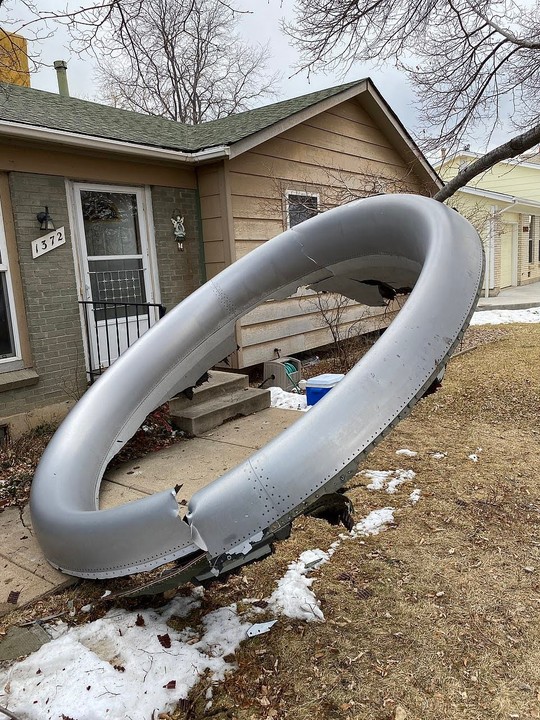 Boeing declined to comment and referred questions to United.
'Flight 328 from Denver to Honolulu experienced an engine failure shortly after departure, returned safely to Denver and was met by emergency crews as a precaution,' United spokesperson David Gonzalez said in a statement. 'There are no reported injuries on board, and we will share more information as it becomes available.'
All passengers were to be rebooked on a new flight to Hawaii, the airline said.
Audio of the pilot’s distress mayday call to air traffic control was released on Saturday.
‘Three twenty eight, heavy, experienced engine failure. We need to turn,’ the pilot is heard telling the air traffic control operator back in Denver.
‘Mayday, mayday, United 328...Heavy...Mayday mayday...Aircraft just experienced engine failure, need to turn immediately,’ the pilot says.
The air traffic controller then guided the pilot on where to turn in order to land the plane back safely.
'The FAA is aware of reports of debris in the vicinity of the airplane’s flight path. Please contact local officials and the airline for further information about the passengers,' the Federal Aviation Administration said in a statement.
The Broomfield Police Department posted photos on Twitter showing large, circular pieces of debris leaning against a house in the suburb about 25 miles north of Denver.
Police are asking that anyone injured come forward. One officer said it was a miracle nobody on the ground was hurt.
Huge pieces of the plane's engine cowling could be seen littering the lawns of houses.
Additional debris was found scattered across turf field at Commons Park as well as the Northmoor and Red Leaf sections of Broomfield.
'The plane started shaking violently, and we lost altitude and we started going down,' said David Delucia of Fort Lauderdale, Florida.
Delucia was sitting directly across the aisle from the side with the failed engine.
He said: 'When it initially happened, I thought we were done. I thought we were going down.'
Delucia and his wife retrieved their wallets containing their driver's licenses and put them in their pockets so that 'in case we did go down, we could be ID'd,' said Delucia, who was still shaken up as he waited to board another flight for Honolulu.
'I can honestly say I thought we were going to die at one point because we started dropping altitude right after the explosion,' Delucia told The Denver Post.
'I grabbed my wife's hand and said, "We’re done".' 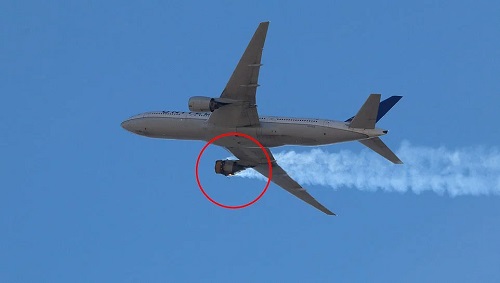 Delucia said another passenger took the viral video posted on Twitter by his stepdaughter. The clip showed the engine engulfed by bright-orange flames.
It took about 30 minutes after the explosion to get the aircraft back to Denver International. Delucia said he experienced 'the worst turbulence you can imagine' during those harrowing moments.
'What a crazy... experience,' Delucia told the Post after landing. 'It was nuts — absolutely nuts.'
Watch video below:
Top Stories