The statue was defaced on Thursday with white and black spray paint by four individuals. 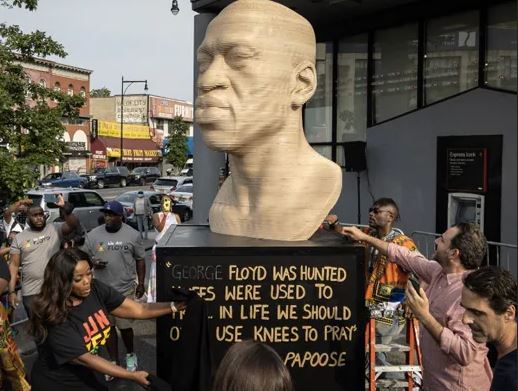 Less than a week after a statue of George Floyd was erected and unveiled in Brooklyn, it has now been defaced by unknown individuals.

The 700-pounds bronze statue of George Floyd was unveiled in Brooklyn, a predominantly African American city in Newark on June 19, in commemoration of the Juneteenth celebration.

The statue, which depicts Floyd sitting on a bench, was commissioned by actor and filmmaker Leon Pinkeye and sculpted by artist Stanley Watts as a donation to the city.

The statue was, however, defaced on Thursday with white and black spray paint.

The website and logo of the white suprematist group, Patriot Front, was also found on the statue, according to DailyMail.

Four suspects connected to the vandalism were caught on camera and the police is working to identify them.

The surveillance footage showed four unidentified individuals who approached the statue at around 3.40am, before they walked away a short time later.

According to the police, the vandalism is being treated as a hate crime.

This act was carried out day before the former Minneapolis police officer convicted in Floyd’s death, Derek Chauvin, is set to face sentencing.

Floyd, whose death sparked a global outcry against police brutality and racial injustice had his one year death anniversary celebrated last month with the US president inviting his family to the White House.

Minnesota Police officer, Derek Chauvin, who has been charged and found guilty of second-degree murder, third-degree murder, and manslaughter was caught on camera while kneeling on Floyd’s neck for more than 9 minutes while the latter pled for breath.