The former Liverpool player has joined up with Aston Villa on loan from Barcelona with an option to buy. 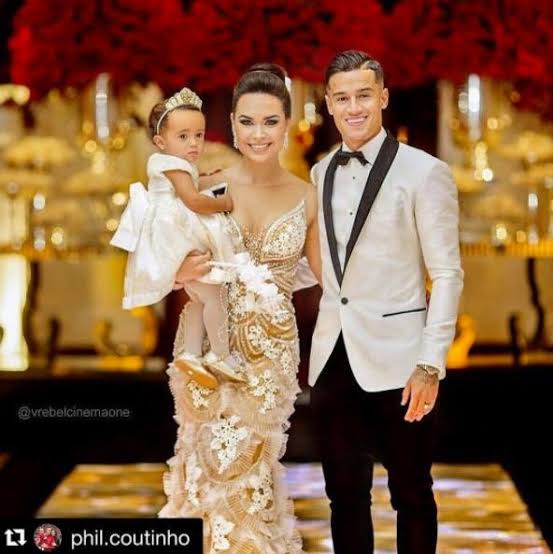 Coutinho and family
Steven Gerard's team has landed Barcelona's Philippe Coutinho on a season loan with an option to buy.
This means that Coutinho is back to the Premier League under his former teammate.
The former Liverpool player has joined up with Aston Villa on loan from Barcelona with an option to buy.
And undoubtedly, along with him will be his doting wife Aine, who’s been at the Brazilian superstar's side since childhood.
Indeed, the 28-year-old has been with the player from his days at Vasco da Gama, then Inter Milan, Liverpool, Barcelona - and now Villa.
Philippe has continued the trend of Latin American players staying true to their sweethearts. Lionel Messi married childhood sweetheart Antonella Roccuzzo in 2017.
While Luis Suarez and his girlfriend Sofi had to maintain a long-distance relationship when he was playing at Nacional.
Philippe and Aine met after a friend introduced the pair at a party in 2007. Philippe was just starting out his career at the time and they continued to grow up together in Rio de Janeiro.
It’s thought that the two lived away from each other when the attacker was on loan to Espanyol in 2012 - but it seemed to strengthen the relationship as they married just months later.
The couple have welcomed three children - daughters Maria and Esmeralda and son Philippe Junior.
Philippe has said of his wife via, according to SunSport.: "Aine plays a huge part in everything I do. We didn't study together, we didn't really have mutual friends, except for one, who had a party and we both went to it. We met there and sat together for a long time just talking.
"She asked me to be her boyfriend. There wasn't really a moment where we were like, 'OK we are together now.'
"We're from the same neighbourhood and so we just started seeing more and more of each other, going places together and it grew deeper and stronger."
Top Stories