Another Traditional Ruler Burnt To Death In Ogun (Videos)


According to reports, the assailants set the man on fire after killing him. 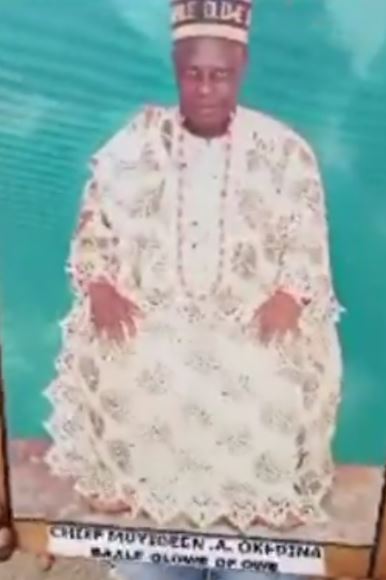 Chief Akin Muheedeen, the Baale of Olowe Gbagura in Abeokuta North Local Government Area of Ogun State have been reportedly  burnt to death.

This is coming one month after the Olu of Agodo, Oba Ayinde Odetola, was killed and burnt to death in Ewekoro Local Government Area of the state.

It was gathered that the community head had gone out to observe the Islamic morning prayer (Subhi), when fire was discovered within his compound.

Family sources said the man was killed by some unknown persons, who broke a window to gain access to where the man was.

They were of the belief that the assailants set the man on fire after killing him.

It was gathered that the deceased Baale currently had an issue with some people over land matters.

According to a report by DAILY POST he was recently arrested and arraigned for his alleged involvement in a tussle with some individuals claiming ownership of a land he was equally laying claim to.

The village head, who was expected to appear in court on March 15, had reportedly commenced the amicable resolution of the matter before his death on Monday morning.

One of his wives, Silifat, while confirming the incident, said she was returning from the mosque around 6am when she saw fire billowing from their compound.

“When I saw the fire, I shouted, I didn’t know what was happening. I rushed down, only to discover that my husband was on fire, already dead. We later found out that a window at the back of the house was broken. We didn’t know who killed him,” Silifat said.

His second wife, Iyabode, said she slept in the same room with her husband, saying her husband left the room at dawn to urinate and pray as usual.

“He used to pray every morning, so he went out around 6am to urinate and prepare for prayer. After about 15 minutes, I heard my senior wife shouting, ‘fire, fire’. I rushed out to discover that it was Baale that was on fire. He didn’t go out with fire or matches. We don’t know who did this,” Iyabode explained.

Speaking, the Seriki of Olowe, Chief Kazeem Dauda, while condemning the incident, explained that there was an issue between the Baale and some individuals.

“Few days ago, I was here with him to talk to him so as not to panic about the case in court. Some people have been claiming ownership of his land. He was even arrested and granted bail in court. He was supposed to be in court again on the 15th of March. He was a gentleman. This would be the first time he would have an issue with anyone.

“I got a call this morning that he burnt himself to death. I said, ‘how come?’ But when I got here, we discovered the window was broken. He couldn’t have burnt himself like that,” the Seriki said.

The Ogun State Public Relations Officer, Abimbola Oyeyemi, said he had not been briefed about the incident.

Hours later, Oyeyemi said he could not contact the DPO of Imala for details about the incident.

“I will call you back when I contact the DPO of Imala,” Oyeyemi promised. 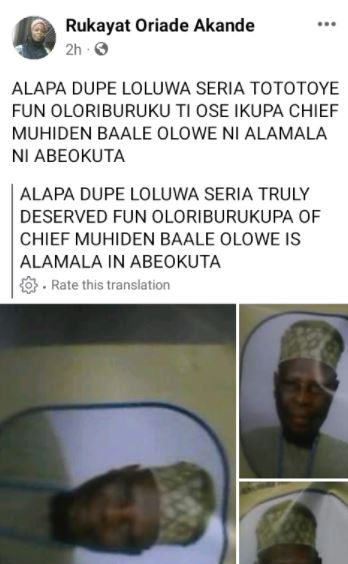