During interrogation, the victim reportedly told the chemist that her aunt’s husband had s*xual intercourse with her, adding that when she complained to her aunt, she shrugged it off. 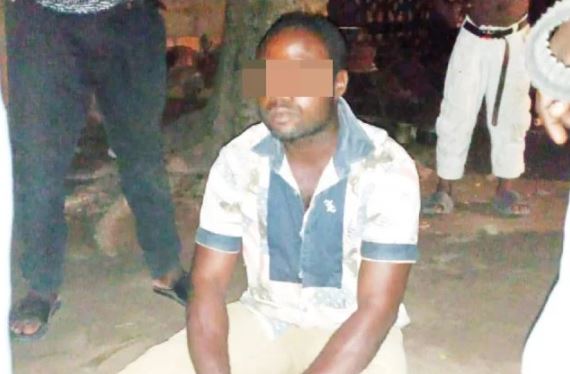 According to a report by The PUNCH, an Okada rider, identified simply as Godwin, has been accused of defiling his 10-year-old in-law in Kanshio community, in the Makurdi Local Government Area of Benue State.

It was gathered that the minor was running an errand when she visited a chemist.

During interrogation, the victim reportedly told the chemist that her aunt’s husband had s*xual intercourse with her, adding that when she complained to her aunt, she shrugged it off.

A member of the community, Patrick Adem, who spoke to our correspondent, said community youths trailed the suspect down to where he was arrested, adding that the motorcyclist confessed to the crime.

Adem said, “The whole thing started around 10pm on Saturday; about 15 men in Kanshio community, Makurdi, brought Godwin to my friend’s house. My friend’s name is Mfe Shaminja, he is an in-law to Godwin’s wife.

“Shaminja was not around when the crowd came, but when I saw the crowd, I moved closer to know what happened and they narrated what Godwin did.

“They said the young girl went to buy something at a chemist and when she saw a nurse, she started complaining of severe stomach ache.

“When the woman asked her what happened, she said her aunt’s husband had been having s*x with her and that she told her aunt but she didn’t believe her. So, it was the nurse that raised the alarm and people went to apprehend Godwin at his house.

“It was when they started asking for Godwin’s wife’s mother that they came to where Shaminja stays because their mother lives with him. I saw Godwin being questioned and he didn’t deny. He (Godwin) said he had issues with his wife, left home and was drunk when he returned home.

“He said he went to sleep where the children slept and the incident happened there. He said it happened once, but the young girl said he had slept with her up to three times. The girl is about 10-year-old.”

A rights activist, Ukan Kurugh, said the child was taken to the Benue State University Teaching Hospital, adding that Godwin was handed over to officials of the National Agency for the Prohibition of Trafficking in Persons in the state.

He said, “Godwin was handed over to vigilantes in the community and after NAPTIP was informed, we mobilised to take him from the vigilantes.

“Initially, community elders wanted to settle the case, but we insisted that the matter was already with NAPTIP. The girl was later taken to the Benue State University Teaching Hospital for treatment and her father has been contacted.”

Our correspondent saw pictures of the victim lying on a bed in the hospital where she was being treated.

Also, pictures of Godwin while being interrogated by residents were seen by our reporter.

The victim’s father urged the government to intervene in the matter.

He said, “My daughter is still with NAPTIP; she is fine. My mind has not settled, but my sister has been calming me down. I want the government to help my daughter.”

The Zonal Commander, NAPTIP Zonal Command, Makurdi, Gloria Iveren-Bai, said the suspect had been arrested, adding that the victim was undergoing counselling in a NAPTIP shelter centre.

She said, “On Sunday, May 8, 2022, NAPTIP Makurdi Command received a complaint letter from a man who wrote that his nine-year-old daughter was s*xually abused by one Godwin Shagbaor.

“The victim was rescued and taken to a hospital for various tests and the medical report is being awaited; she is presently undergoing counselling.

“The suspect accepted to have committed the offence but blamed it on alcohol. The suspect is under detention as investigation is ongoing.”