Releasing the latest statement, ISWAP claimed the community was attacked because it was occupied by Christians. 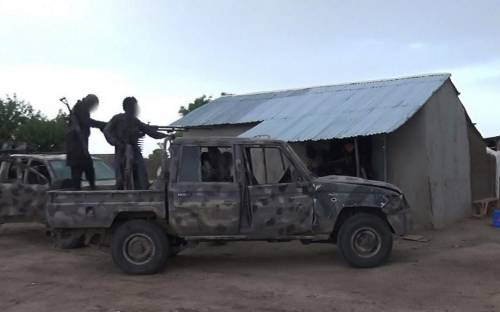 According to a report by SaharaReporters, some militants from the Islamic State-backed faction of Boko Haram, the Islamic State West Africa Province (ISWAP), formerly known as Jamā'at Ahl as-Sunnah lid-Da'wah wa'l-Jihād, have released photographs of their attack on Kautikari village in the Chibok Local Government Area of Borno State.

ISWAP had earlier claimed its fighters killed 10 Christians during the attack.

The insurgents had on May 3 ransacked the community.

A military base stationed in the town was also dislodged by the terrorists.

Releasing the latest statement, ISWAP claimed the community was attacked because it was occupied by Christians.

“Fighters attacked and killed many people in the Christian town of Kautikari,” the group said.

In December 2021 and January 2022, Kautikari was separately attacked by the insurgents who abducted many women and children.

Also, a church in the community was razed by the insurgents during the attacks.

Attacks in Chibok areas and particularly the recent one in January 2022 made the Borno State governor, Prof Babagana Zulum, visit the area and encourage the people as well as the security operatives stationed in the local government.

During his visit, the governor met with the families of 22 women and two men abducted by the insurgents where he encouraged them and asked them to continue to trust in God through prayers.

Since the death of JAS leader, Abubakar Shekau, ISWAP has been consolidating its grip in locations around Lake Chad.

The sect’s membership has swollen with the defection of hundreds of Boko Haram fighters under Shekau.

The Nigerian Army has repeatedly claimed that insurgency had been largely defeated and frequently underplays any losses.

The terror group has caused over 50,000 deaths and displaced millions of people mainly in Adamawa, Borno and Yobe states.