This comes a few days after the Independent National Electoral Commission said the involvement of the CBN Governor, Emefiele in politics was threatening the 2023 elections. 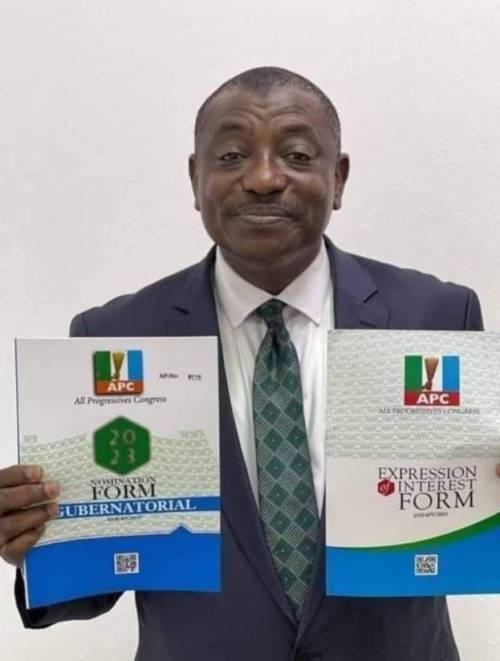 Managing Director of Nigerian Security Printing and Minting Plc, Abbas Umar Masanawa, was among those who picked the N50 million All Progressives Congress governorship nomination and expression of interest forms ahead of the primaries for the 2023 elections, SaharaReporters reports.

In addition to printing the banknotes and the postal orders of Nigeria, the Nigerian Security Printing and Minting Plc also prints some electoral materials for the Independent National Electoral Commission.

The company, also referred to as The MINT, was established in 1963 by the Nigerian government in partnership with De La Rue of the UK and is under the Central Bank of Nigeria.

It began full operation in 1965, producing currency notes and coins for the CBN as well as a wide range of security documents for the government, commercial banks, and blue-chip companies, among others.

Sources told SaharaReporters that Masanawa has refused to resign despite picking up the APC governorship forms.

“The man that mints the naira note has come out to say he is a member of the APC and also declared to run for governor. The Nigerian Security Printing and Minting Plc actually prints some of our election materials. He is from Katsina, he has refused to resign just like his boss at the Central Bank of Nigeria, Godwin Emefiele,” a source told SaharaReporters.

This comes a few days after the Independent National Electoral Commission said the involvement of the CBN Governor, Emefiele in politics was threatening the 2023 elections.

INEC in a statement by Rotimi Oyekanmi, the Chief Press Secretary to its Chairman, said the commission might move ballot papers from the CBN vaults.

The Chairman of the APC Ward 6 of the Ika South Local Government Area of Delta State, Mr. Nduka Erikpume, had on Sunday confirmed Emefiele’s membership of the ruling party, saying the CBN governor registered as far back as February 2021.

Demanding his resignation, some civil society organisations including BudgIt, CISLAC, CLP, Dataphyte, EiE Nigeria said, “The CBN Act (2007) was written to protect the CBN from external political interference, not expecting that the interference could be internal at the highest level.

“If there is any doubt about the implied and expected neutrality of the CBN, Nigerians should be reminded that the materials for our elections are kept in CBN offices across the country and the Nigerian Security Printing and Minting Plc (an agency of the CBN) prints some of our election materials.

“Separation of powers is at the heart of any democracy, and it is for this reason that by our laws, the CBN Governor cannot be appointed or removed at will by the executive arm of government.”

Earlier in the year, Auditor General for the Federation in its 2019 report indicted the mint company under Masanawa for N162 billion in financial infractions.

According to the AGF, the management of the Nigerian government-owned company could not account for the said amount.

The report said N91.1 billion, which appeared in the consolidated financial statements of the minting company for the year ended 31st December 2018 could not be verified and reconciled with the Assets Register due to the non-existence of a proper Non-Current Asset Inventories Ledger.

It also said that Inventories of Raw Materials amounting to N4,459,141,000.00 and Consumables amounting to N2,364,112,000.00 could also not be verified due to the non-existence of proper Inventory Receipts & Issues ledger.

The report said, “In all, a total of N97,918,703,000.00 reported in the company’s financial statement could not be confirmed. The above anomalies could be attributed to weaknesses in the internal control system at the Nigerian Security Printing and Minting Plc.”

The AuGF report also said the sum of N48,931,124,278.37 was overcharged against the Statement of Financial Performance of the company for the years 2016 and 2019 with no verifiable evidence to justify these expenses as most of the figures contained in the Statement of Financial Performance were different from the balances obtained from the Trial Balance.

The report said that the minting company spent about N14.43 billion on salaries and allowances for its staff between 2016 and 2019 without the approval of the National Salaries, Income and Wages.

It also said that in contravention of the Pension Reform Acts, the company paid salaries to its workers without fully deducting only 5% from the workers as against the minimum 8% as stipulated in the law.

The report added that the company failed to deduct about N432.812 million contributory pension from its workers within the period.