This is as the group said the call is premised on Jonathan’s enviable qualities as a seasoned democrat who always put the nation’s interest above personal considerations. 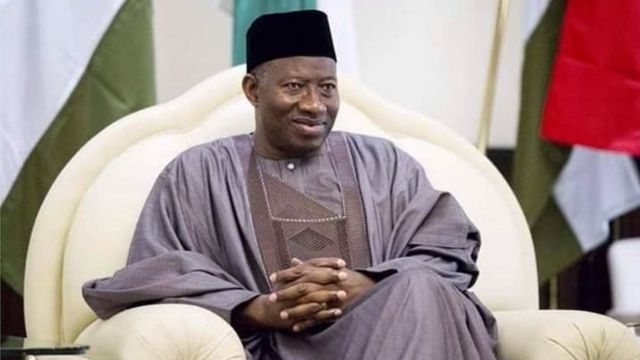 As the May 30 Presidential primaries of the All Progressives Congress, APC, draws near, a political pressure group, Save Nigeria-Buhari Ambassadors, SNBA, Wednesday, called on President Muhammadu Buhari to adopt his predecessor, Goodluck Jonathan as consensus candidate of the ruling party.

This is as the group said the call is premised on Jonathan’s enviable qualities as a seasoned democrat who always put the nation’s interest above personal considerations.

Addressing a press conference at the Nigeria Union of Journalists Conference Room, Abuja, national coordinator of the group, Hon. Jazeel Jamil Ibrahim described the former President as a true leader who stands for the unification of the country “as exemplified in 2015 when he shelved his personal ambition to avert a looming crisis, declaring that his ambition was not worth the blood of any Nigerian.”

The text of the conference read in part: “We wish to call on Mr. President to look inward with his eagle’s eyes and single out Dr. Goodluck Jonathan from the hustling crowd of aspirants canvassing for the Office of the President of Nigeria as a candidate to fly the flag of the APC in 2023 Presidential election.

“Dr. Goodluck Ebele Jonathan has established himself as a true democrat , a peace ambassador and a patriotic Nigerian who stand for the unification and cementing of the already fragmented pieces called Nigeria as one indivisible nation.

“Jonathan has high level of integrity and credibility. He is a sound academician, an egg head with capacity to revamp and revive any economy.

“He is a secured leader who tenaciously and systematically drives with passion his overwhelming commitment to change the global negative perceptions of the Nigerian elections by reforming the electoral process and establishing a culture of non-violent, free, fair and credible elections.”

Fielding questions from journalists on the sideline of the press conference, Hon. Ibrahim affirmed the remark credited to Igiri Freeman, Chairman of APC, Ogbia Ward 13, Bayelsa state that Dr. Jonathan indeed registered with the APC in 2019, four years after losing to Muhammadu Buhari.

A Fulani group recently purchased a Presidential nomination form for the ex-President for a fee of N100m; a development that attracted diverse reactions from Nigerians. While Jonathan quickly issued a statement denying knowledge of the form obtained on his behalf, he has since visited APC national chairman, Senator Abdulllahi Adamu, thus fuelling speculations that President Buhari is likely to back him for the exalted office.