Instead of the suspect to stop, he accelerated and intentionally knocked down the officer who sustained a serious bodily injury and passed out momentarily. 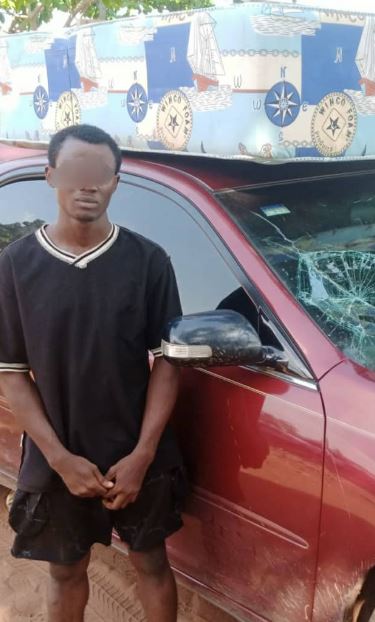 Victor Olabisi Oluwatimilehin, a 400-level student of Olabisi Onabanjo University Ago Iwoye, has been apprehended by the Ogun state police command on the 1st of June 2022  for allegedly making an attempt to kill a police officer on duty along Ijebu ode, Ibadan road.

A statement released by DSP Abimbola Oyeyemi, spokesperson of the Ogun state police command, says the suspect was seen driving a fully artificial tinted Toyota Camry car with registration number LND 929 GX loaded with some house properties towards Ibadan, Oyo state and was flagged down for checking since the occupants were not visible from outside.

''Instead of the driver to stop, he accelerated and intentionally knocked down one Inspector Idowu Moses attached to PMF 71 Awa Ijebu consequent upon which the said inspector sustained a serious bodily injury and passed out momentarily.

Having knocked down the policeman, the driver continue his journey towards Ibadan road believing that the policeman is dead. The seriously injured policeman was rescued by his other colleagues. He was taken to the hospital for treatment while others started tracing the suspect towards Ibadan road. He was eventually arrested at a village close to Ibadan and brought down to Ijebu ode area command.''the statement read in part.

Oyeyemi added that the state Commissioner of police, CP Lanre Bankole, has ordered that the suspect be charged to court as soon as possible. He also warned that attacking his men while on duty will not be tolerated, therefore, members of public should desist from such criminal act.