For four months, perpetrators of the dastardly act have been on the run until they were arrested recently by operatives of the Force Intelligence Response Team FIRT. 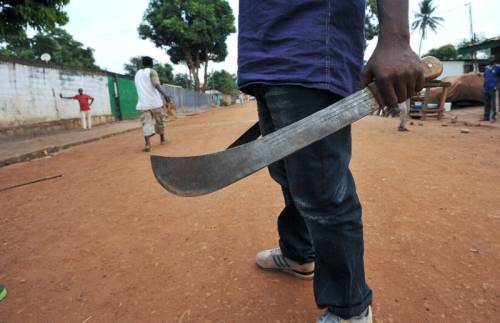 Ifidon Victor, a twenty-two-year old man laid in the pool of his blood , on the floor of a private hospital in Benin city, the Edo State capital, waiting for nurses to wheel him into emergency ward to be treated.

Then, all of a sudden, some armed young men rushed into the hospital and allegedly beat him to coma before dashing out unmolested.

For four months, perpetrators of the dastardly act have been on the run until they were arrested recently by operatives of the Force Intelligence Response Team FIRT.

Their arrest followed a petition written by a relative of the deceased based in Abuja, to the Inspector-General of Police, IGP Usman Alkali Baba, who directed the FIRT to go on the trail of the fleeing suspects.

During investigation, the suspects: Josiah Okon, Lucky Alabi, Anthony Aigbodion, Victor Aigbodion and Aikhonrin Godwin, who confessed to be members of same cult group – Vikings, also disclosed that the deceased was killed during a fight over N3,000 debt.

They narrated their respective roles in the death of Victor.

For 23-year-old Josiah Okon, the prime suspect, he traced the genesis of the murder saga to when a friend of the deceased, identified simply as Sylvester, took a loan of N3,000 from him, with a promise to pay back with N1,000 interest, in six months time.

According to the mason who said he left his base in Owan, Edo state to Benin owing to pressure from his cult members, “ Sylvester approached me for a loan of N3,000 last year. He said he needed it to effect repairs on his okada. I gave him on the condition that he would pay back with N1,000 interest.

“But he never refunded the money. He did not even call to apologise for the delay. When I eventually met him, he gave me his MP3 Bluetooth speaker to hold pending when he would pay back the loan.

“ Hours later, he brought only N1,000 and demanded his MP3 but I refused to give him. I insisted rather, that I would only release it when he paid the balance.

“ By midnight Sylvester and three of his friends stormed the house and started beating everyone in sight. He demanded to have his MP3 back. I had to come out from where I hid it and handed him the MP3 when it became apparent that my roommates could not bear the attack.

“ In relation, owner of the house Alabi, who is also a Viking, was astonished because Sylvester is a member of same cult group. Accompanied by some other members, we decided to go for a reprisal attack.

“ On our way, we saw Sylvester and some of his friends advancing towards us to continue from where they stopped. Luckily we were armed with cutlasses. We overpowered them. One of those who accompanied Sylvester, Victor, sustained machete cut in his hand. He was rushed to the hospital .

“ We were not satisfied because Sylvester, who caused the trouble was not hurt. We mobilised again and went to the hospital in search for Sylvester only to meet Victor bleeding on the floor unattended to.

“ Our intent was not to kill Victor but to ensure Sylvester who caused the trouble, sustained injury. Police should understand that the fight was in self-defence, he said.

For Alabi, he said he was angry with Sylvester for destroying his property when he was not the one that collected his MP3.

He said “ Josiah is my friend, he only came to spend the night in my house. We went to the hospital to confirm that Sylvester was really wounded, only to find Victor on the floor wounded”.

He however said they did not attack him at the hospital, but that news of his demise filtered in two days later and that they had to flee to evade arrest.

Also on his part, Anthony, a tailor, said his love for his younger brother made him join in the fight.

Anthony who said he left his village for town, to stay away from cult activities, said “I joined them when I heard my younger brother was inflicted with machete cut by Sylvester.

“I was the one who gave Victor the cut that landed him in the hospital. I was bitter that they dared to touch my only brother, whom I promised my mother I would protect. Unfortunately, we are facing same murder charge”.

The Force Public relations Officer, CSP Muyiwa Adejobi confirmed the arrest. He said efforts were still on to arrest other fleeing members.