Police said the suspects confessed to be members of Indigenous People of Biafra (IPOB) and Eastern Security Network (ESN). 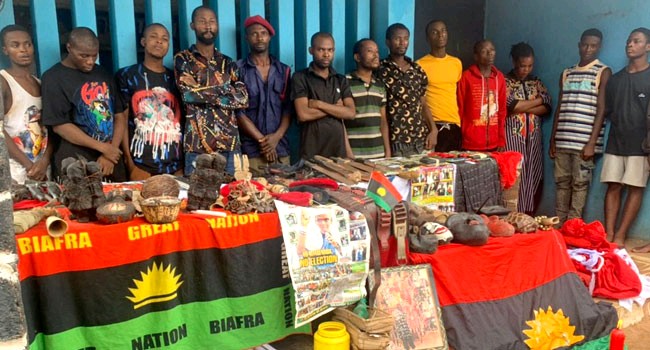 Suspected killers of former aide of ex-President Goodluck Jonathan, Ahmed Gulak have been arrested.
Recall that Gulak was killed last year along Ngor Okpala Airport Road in Owerri.
The Imo Police Command on Monday paraded the gunmen it claimed killed the politician.
According to Channels Television, the suspect identified as Anosike Chimobi from Ahiazu Mbaise Local Government Area (LGA) of the state were apprehended one year after Gulak’s death.
Gulak, a former aide to former President Goodluck Jonathan, was murdered by a group of armed men on May 30, 2021, during a visit to Imo State.
He was reportedly trailed from his hotel room to the spot where he was killed around Umueze Obiangwu in Ngor-Okpala LGA, close to the Sam Mbakwe Airport Road in Owerri.
Parading the suspects alongside others, Abattam said Chimobi had been on the trail of the command since the killing of Gulak last year.
He stated that the suspect escaped during a gun battle between police personnel and his gang members at Aboh Mbaise shortly after the murder of the APC chieftain where five of the suspects were killed.
Chimobi, who also spoke with reporters, claimed to be a commercial bus driver and not a member of the criminal gang.
He said Gulak’s killers approached him to convey them in his vehicle and he attempted to resist, but later gave in after they threatened to kill him.
The suspect admitted that he drove the criminals to the spot and blocked Gulak’s vehicle which was on its way to the airport.
According to him, they shot the APC chieftain after he resisted the demand by the gunmen that he should come down from the vehicle.
Chimobi explained that the assailants later ran into a team of security operatives who shot repeatedly at the other vehicle conveying them until it somersaulted and caught fire.
The command’s spokesman said that the police have also arrested other suspected criminals who have been terrorising communities in Imo.
He explained that among those paraded were members of the gang who burnt the home of the President-General of Ohanaeze Ndigbo, Professor George Obiozor.
Some of the items recovered from the suspects paraded by the police include guns of different calibre, assorted charms, and a live snake, among others.
Top Stories