The image alongside the tweet insinuated that Atiku was instrumental to the recruitment of the individuals under the administration of former President Olusegun Obasanjo. 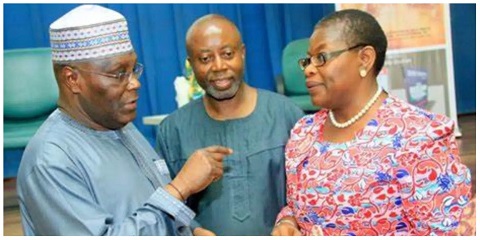 The Peoples Democratic Party has been slammed by a former Minister of Education, Oby Ezekwesili on Twitter.
It happened after the party used her picture to make a false claim.
PDP, in a tweet which had photos of Kaduna state Governor, Nasir El-Rufai, World Trade Organization DG, Ngozi Okonjo-Iweala, former Minister of Education, Oby Ezekwesili, Anambra state Governor, Charles Soludo, said that the presidential candidate of its party, Atiku Abubakar, is committed to working diligently to achieve a united, secure and economically viable Nigeria.
PDP tweeted: “2023, The @OfficialPDPNig presidential candidate @atiku is committed to working assiduously to achieve a united, secure and economically viable Nigerian that will work for all citizens irrespective of their social status, religious, ethnic or political biases.”
The image alongside the tweet insinuated that Atiku was instrumental to the recruitment of the individuals under the administration of former President Olusegun Obasanjo.
Reacting, Ezekwesili described the statement as false and extremely misleading.
She demanded for it to be removed.
She wrote: “It might be an innocent mistake, but this statement is false and therefore extremely misleading @OfficialPDPNig. He did not. It is also wrong that you have used my picture in your campaign flier without my consent. Please kindly remove this immediately. Many thanks.”
Hours after PDP deleted the tweet, Ezekwesili said the opposition party has done the right thing, adding that facts are sacred and must always be upheld.
She tweeted: “I am pleased that @OfficialPDPNig has done the right thing and deleted that erroneous tweet. Facts are secret and must always be upheld” 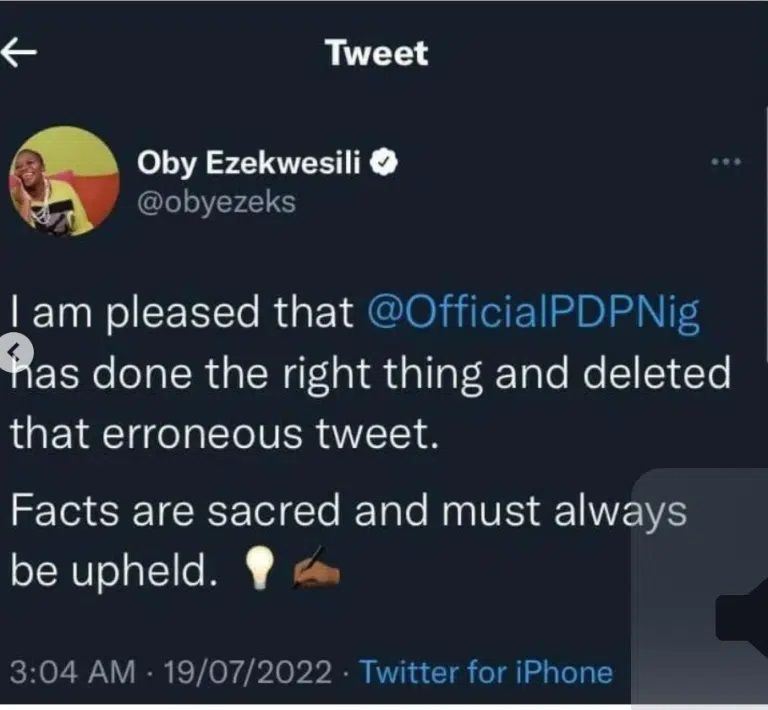