The man alleged that Ebebeagu men who came with pump action guns, already killed several people on their way coming to the venue of the traditional wedding. 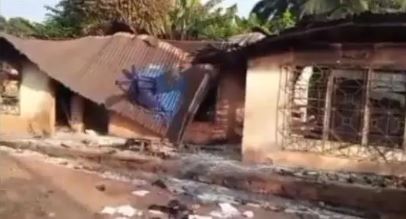 A young boy has narrated how men of Ebubeagu security outfit killed at least 14 persons at a wedding in Imo state.
The boy who identified himself as a younger brother to the girl who was having her traditional marriage introduction confirmed that the incident happened during the traditional wedding of his sister.
He confirmed that 14 of the people that came with their in-law, were all shot dead in their house.
According a voice in the background who was conducting the interview, it was gathered that the incident happened on Sunday, July 17, 2022. The voice added that the man whose compound was invaded and his guests shot dead, is seriously hospitalized. Cars and motorcycles belonging to the guests were all taken from then by Ebebeagu security outfit.
The narrator state that Ebebeagu men who came with pump action guns, already killed several people on their way coming, which included commercial riders and passerby, which was also confirmed by the younger brother of the bride.
However, Gov. Hope Uzodimma in his speech, distanced Ebebeagu from the attack, and said that the sweep was done by the DSS, at the camps of IPOB and unknown gunmen.
Contrary to this, the younger brother of the bride, confirmed that when the gun men came, they accused the guests who were seen in an earlier video drinking, eating, (and making gests of themselves) that they were doing IPOB meeting, but it was explained to the gunmen that the gathering was for traditional marriage introduction. He also confirmed that the in-laws only came to collect marriage lists, and nothing more.
Watch video below: