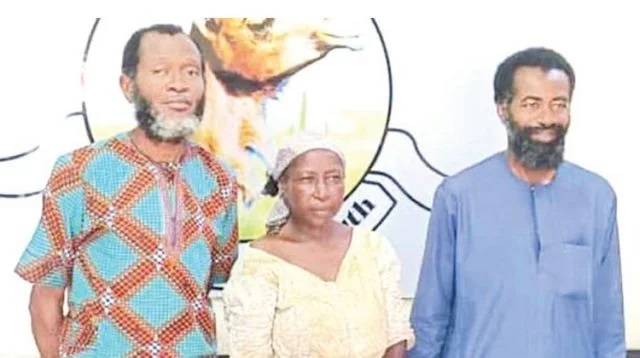 A photo has emerged showing the three abducted the Abuja-Kaduna train passengers released by terrorists on Monday.
Recall that the victims were among others abducted on March 28.
According to Punch, it was learnt that while three hostages were released on Monday, one victim had earlier regained freedom about a week ago.
The release of three persons on Monday came barely 24 hours after the terrorists, in a video, threatened to abduct the President Muhammadu Buhari, Kaduna State Governor, Nasir El-Rufai, senators and other top government officials.
Tukur Mama, Publisher of Kaduna-based Desert Herald newspaper and Media Consultant to Islamic cleric, Sheikh Ahmed Gumi, confirmed the release of the four abducted passengers.
Those released were Mrs Gladys Brumen, Oluwatoyin Ojo, Hassan Lawan and Pastor Ayodeji Oyewumi.
Although he had since withdrawn as negotiator, Mamu said, “It’s true that three victims were released today (Monday). Even before today, about a week ago, one of the victims was also released. I can tell you there is no single intervention of the government.
“Credible source informed me that the families were left to deal directly with the terrorists and then negotiate their release which is unfortunate because if the government is discouraging the payment of ransom and at the same time allowing the families to deal directly with the abductors, that’s even encouraging the payment of ransom.”
Also, while reacting to the release of the three victims, leader of the victims’ families, Dr. Abdulfatai Jimoh, told The PUNCH that, “We are very happy and we thank God on the release of three more victims of the Abuja-Kaduna train attack. We hope and pray for the release of the remaining abducted passengers very soon.”
Meanwhile, protesting families of the abducted passengers on Monday grounded activities at the Ministry of Transportation in Abuja.
The families, who defied the early morning rain, stormed the ministry at 6am and formed a human blockade at the entrance gate.
The action of the protesters forced some staff members of the ministry to return home while others were seen loitering around till 1pm when our correspondent left the scene.
Speaking during the protest, Ibrahim Ahmed, called on the government to promptly see to the release of their loved ones, adding that further delay could be dangerous.
He said they would continue to protest until the government comes to their rescue.
Another family member, who gave her name as Matilda, said the pain of watching her loved one being tortured in a video released by the terrorists, was traumatic.
She demanded that the families be carried along in whatever efforts the government is making.
Top Stories