Mr Ejiofor, who made the call on Friday in Abuja disclosed that DSS detained them since June 2021. 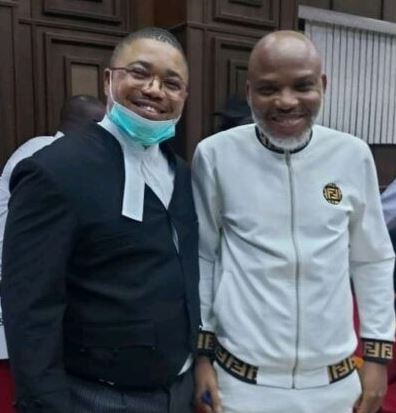 Ifeanyi Ejiofor, the lawyer of leader of the Indigenous Peoples of Biafra, (IPOB) Nnamdi Kanu, is seeking the immediate release of three of his domestic workers in DSS custody.

Mr Ejiofor, who made the call on Friday in Abuja at a news briefing, listed the detained personnel as Felix Okonkwo (driver), Okafor Ugochukwu (gardener) and Ikenna Chibuike (steward), saying DSS detained them since June 2021.

The lawyer told reporters that Justice H. A. Nganjiwa of a Federal High Court sitting in Awka had in a judgment of July 22 ordered the release of the staff members.

He said the judgment was on a suit challenging the invasion of his ancestral home by operatives of the Nigerian Police, the DSS, Army and Chukwuka Ofoegbu (aka Ijele speaks) on June 6, 2021.