How Governor Okowa Reacted To The Emergence Of New CAN President


CAN formally validated the election of Okoh as its new president after polling 100 per cent of votes casted by the 259 delegates at its 12th General Assembly. 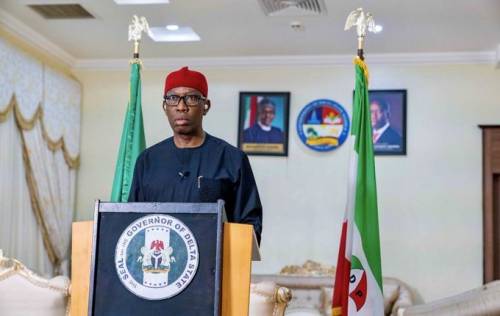 Sen. Ifeanyi Okowa, the Delta State governor, has reacted to the election of the new CAN President.

The governor on Friday congratulated Most Rev. Daniel Okoh on his election as president of the Christian Association of Nigeria (CAN).

CAN formally validated the election of Okoh as its new president after polling 100 per cent of votes casted by the 259 delegates at its 12th General Assembly.

The Peoples Democratic Party’s (PDP) vice-presidential candidate also commended the Christian community for the peaceful conduct of the convention, saying that it reflected the promotion of peace and unity which it preached.

He charged Okoh to mobilise citizens to collectively pray for the country; champion the crusade of religious tolerance and build bridges in that regard.

“On behalf of the government and people of Delta, I congratulate Most Rev. Okoh on his election as CAN’s president.

“We are pleased with your peaceful emergence as the number one leader of Christians in Nigeria.

“The task ahead is onerous and it is our prayer that in your new position, God uses you to counsel and move the entire Christendom in Nigeria in the direction that you have been ordained to lead.

“I must also appreciate the role of the Church in promoting peaceful co-existence, education and social welfare in our state and country,’’ he said in statement issued by his media aide, Olisa Ifeajika.

The governor also commended the outgoing president of the association, Dr Samson Ayokunle, for successfully piloting the affairs of CAN during his tenure.

“As Deltans, we remain extremely proud of your illustrious contributions to the growth of the Christian faith in Nigeria,’’ Okowa added.