On July 27, 2022, the Chief Judge of the State, Ekaette Obot, sentenced Effiong to one month in prison for alleged contempt. 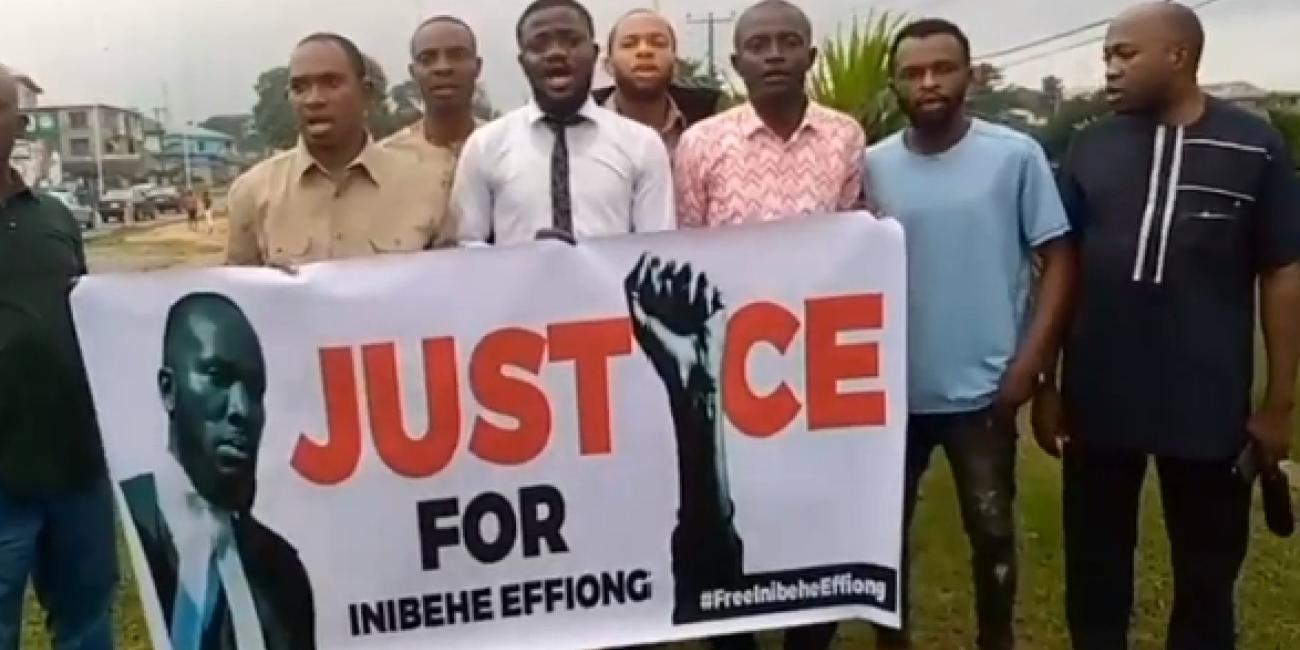 Some Nigerians have begun to protest the incarceration of popular lawyer, Inibehe Effiong.

A protest has commenced in Uyo, the Akwa Ibom State capital against the illegal imprisonment of the human rights lawyer, Effiong.

On July 27, 2022, the Chief Judge of the State, Ekaette Obot, sentenced Effiong to one month in prison for alleged contempt.

The human rights lawyer, who also serves as the National Legal Adviser for the African Action Congress (AAC), was in court to defend lawyer Leo Ekpenyong in a libel suit filed by Akwa Ibom Governor Udom Emmanuel.

Meanwhile, civil society organisations and many Nigerians have condemned the illegal imprisonment of the human rights lawyer.

On Thursday, a video posted by CrossRiverWatch shows activists with a placard chanting and calling for the release of the human rights lawyer.

Marching on the streets of Uyo, the protesters chanted, “What do we want? Free Inibehe! When do you want it? Now!”

One of the protesters said, “We believe Judiciary is the last hope of a common man, but we are afraid what is happening these days in our court is beginning to erode the judiciary of this sacred belief.

“I will quote directly from what the Nigerian Bar Association president said, ‘assuming Inibehe was wrong, due process was not followed’. Clearly, what happened on that day as far we are concerned was premeditated.

“In all my years of going to court, the only time you see a police officer in court, is when he is the orderly of the judge, who stands behind the judge, mostly not harmed. But on that fateful day, two mobile police officers with AK47 rifles were inside the court.

“This shows that already all of these things were all planned. We wonder about a judge who had been asked to relieve herself from the matter, but instead of doing so, chose to take (as far as we are concerned) law into her hands.

“The law to convict anybody to prison is qualified and absolute. She is not a military dictator. Constitution and judicial process defines power. We are saying that she should reverse herself. We are demanding the immediate release of Inibehe.”

The protesters, who held placards that read, "Injury to one is injury to all," "Free Inibehe Effiong Now!" "Justice for Inibehe Effiong," and "We demand immediate release of Inibehe," urged the judge to order the lawyer's release immediately.

Princess Mikki Attah, convener of 'Nude Nigeria-The Best Man,' addressed journalists during the joint protest in Uyo, Akwa Ibom State, and expressed disappointment over the continued incarceration of Effiong, whom she described as a law-abiding citizen.

She stated that she decided to join other voices in calling for Effiong's release after learning about how Effiong was imprisoned for requesting that the Chief Judge remove security personnel from the courtroom.

In a joint statement on Wednesday, about 23 human rights organisations said the “unfortunate incident has only succeeded in further deepening the trust deficit of the common man has with the courts and can only lead to one path - self-help.”

They said the action of Obot was a calculated conspiracy aimed at destroying the judiciary.

“Mr. Effiong, who was representing his client Leo Ekpenyong in the defamation case with suit numbers HU/279/2019 and HU/273/2019, instituted by Governor Udom Emmanuel of Akwa Ibom State and Senator Bob Effiong, was terribly humiliated by Justice Ekaette Obot in what will go down in history as a dark day in Nigerian democracy.

“If such cruel intimidations are not resisted and condemned, no lawyer will be able to speak up in the future when the court is playing tricks after striking dark deals with the petty bourgeoisie that populate our political class. This unfortunate incident has only succeeded in further deepening the trust deficit of the common man with the courts and can only lead to one path - self-help. This, in turn, will inevitably result in anarchy if there is no lawful resistance to arrest the situation.”

Those who signed the statement include the Institute of Human Rights and Humanitarian Law, CrossRiverWatch, We The People, Rivers State Civil Society Organisations, Foundation For Leadership And Citizens Development, CAMP Forum, Nigerian Observatory For Human Rights, Citizens Solutions Network, AAC, Take It Back Movement and Center for Community Empowerment in Conflict & Peace-building.