Tension As Great-Grandma Slumps And Dies While Climbing Lagos Bridge


The woman, believed to be in her late 70s, wanted to connect to the Lagos-Ibadan Expressway in the company of her daughter when the unfortunate incident happened. 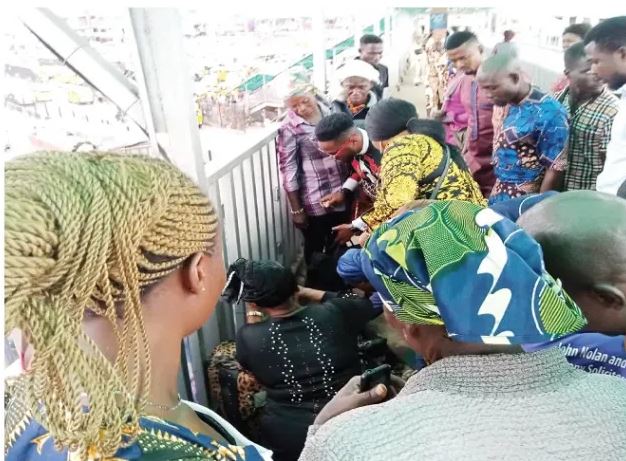 There was palpable tension on Monday in the Berger area of Lagos State after a yet-to-be-identified great-grandmother collapsed while climbing a pedestrian bridge.

Punch Metro gathered that the woman, believed to be in her late 70s, wanted to connect to the Lagos-Ibadan Expressway in company of her daughter when the incident happened.

When Punch correspondent arrived at the spot, the woman was motionless with her tongue sticking out.

Her daughter was seen struggling to revive her as she beckoned on other pedestrians to support her.

Although some commuters who clustered around her were confused on what to do, she held her mother closely in her arms.

A medical expert, who came into the scene, performed a cardiopulmonary resuscitation (CPR) on her, but she did not respond.

Her daughter, who called a relative at the scene of the incident, was heard saying, “Had I known, I would not have allowed her (victim) to follow me.”

A pedestrian, who spoke on condition of anonymity for security reasons, said the woman did not get the needed attention on time.

He said, “The moment she fell on the ground, some people became scared, even as her daughter kept shouting for help. It was when I moved close to her that others joined and poured water on her. By the time they gave her water to drink, her tongue had stuck out.”

The septuagenarian, who was still unconscious after several efforts to revive her failed, was later taken to a hospital with the support of three female good Samaritans.

One of them, Feyisara Oriola, told Punch Metro on Tuesday that she had passed away.

Oriola said the deceased had insisted on following her daughter, whose first child just gave birth and was planning to hold the baby’s christening the following day.

She said, “Her grandchild just gave birth and the baby’s christening is being held today (Tuesday). So, she decided to follow her daughter.

Though her daughter refused to bring her along, she insisted on following her. We were told that there was nothing wrong with her before they left home. So, I think it was the stress of climbing the bridge that affected her.''