Hisbah Arrest Man With Army Uniform And Gun In Kano


The suspect had been disguising as an army officer to extort money from people along the popular BUK road in the state metropolis. 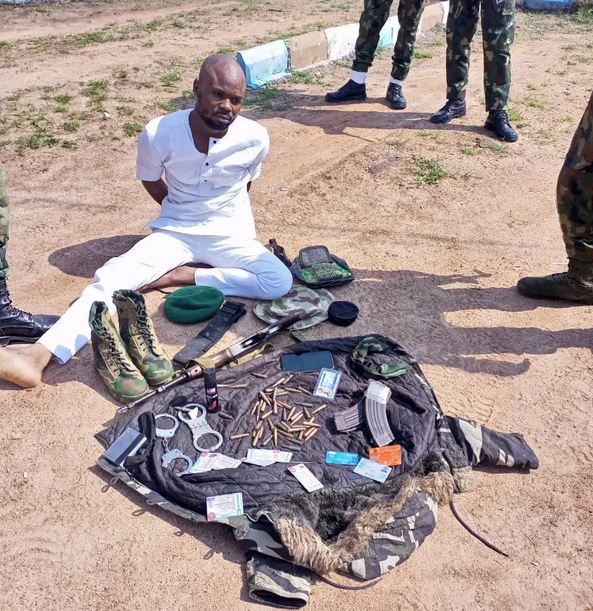 A yet-to-be-identified suspect has been apprehended by the Kano state Hisbah officials with an Army uniform, a rifle and ammunition.

DailyTrust reports that the suspect had been disguising as an army officer, with the name tag M.A Ibrahim to extort money from people along the popular BUK road in the state metropolis.

A resident of the community who spoke on condition of anonymity said the suspect was living at Danbare area of BUK, and had been telling people that he was a captain in the Nigerian Army.

The suspect was arrested on Thursday, August 18, after he forcefully secured the release of his girlfriend, who was arrested by Hisbah officials. He was said to have shot into the air at the Hisbah office and freed her.

“You know Hisbah officials come here to arrest ladies that come to take drugs and do other indecent things. So they arrested his girlfriend and took her to their office. When he got to the Hisbah office here in Danbere, he fired shots into the air more than three times and went away with her.

We then reported to the police and the army here in Janguza barracks. When we sent them his pictures, they realized that he is not an army officer and directed that whenever we see him we should call them. When we saw his car parked at one filling station, we immediately called them and they arrested him'' an eyewitness told the publication

He said although the suspect was not arrested in his car, a gun and army uniform were found in his car.

The spokesman for the police in the state, SP Abdullahi Haruna Kiyawa, said he learnt about the case but the suspect had not been handed over to the police.