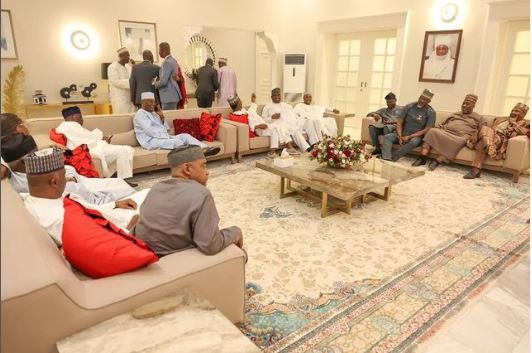 Dino Melaye, the spokesperson for the Atiku Abubakar Campaign Organisation, has caused a stir online.

Melaye, in a now deleted post on Facebook, uploaded a picture and captioned it: “At Atiku’s country home in Dubai.”

Moments after the post went viral, the former lawmaker was dragged by his followers.

Amid the backlash, he took down the post and reposted the same picture with the caption: “At Atiku’s country home in Jada, Adamawa State.”

But this did not stop critics from lashing the former lawmaker.

Meche Oswald: “Why did you delete it before, Oga? I thought you said it was Atiku’s country home in Dubai? Everything about you and Atiku is FAKE!”

Wole Adeyemo wrote, “Dino, you think you are smart ? You’ve airlifted the Dubai country home to Jada in Nigeria.”

Theophilus Danladi: “All those noise he’s been making are for gains not for national interest and progress!”

Bisi Funmilayo Oguntola Onawola: “They are living as if they were in paradise, meanwhile the voters are living in abject poverty”

Zakari Abdulfatai Suleiman: “Atiku country home in Dubai and then transferred to his country home again in Jada, Adamawa state. Dino you are in lack of maturity, sense of belonging and direction.”

Moses Philip: “But you said country home Dubai? I was surprised! Please be careful if not you will make people believe that Atiku is not a Nigeria as people keep saying.”

Aniagor Chukwuemeka: “From Country home in Dubai to Jada. If confusion was a person…”