Italian Man Becomes The First Person To Test Positive For Monkeypox, COVID And HIV At The Same Time


The man, who has not been identified, spent five days in Spain from 16 to 20 June 2022 during which he admitted to having unprotected sex with men. 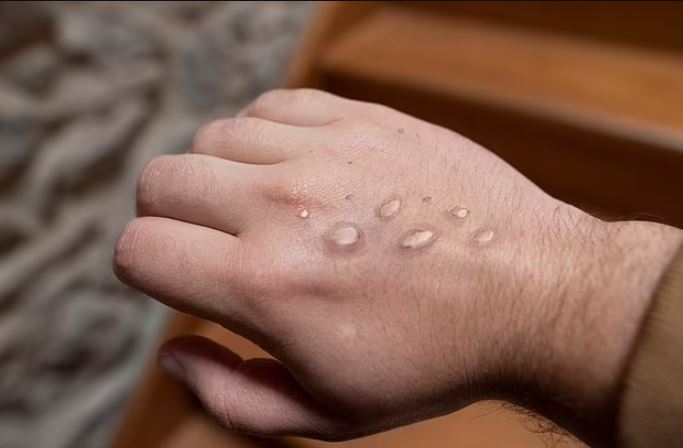 The very first known case of a person testing positive for monkeypox, Covid-19 and HIV at the same time has been reported by scientists.

Earlier this year, a 36-year-old Italian male began to develop a series of symptoms — including fatigue, fever, and a sore throat — nine days after returning from a trip to Spain.

The man, who has not been identified, spent five days in Spain from 16 to 20 June 2022 during which he admitted to having unprotected sex with men.

On July 2, the man tested positive for Covid, according to a case study report published in the Journal of Infection.

On the afternoon of the same day, a rash started to develop on his left arm. The following day, small, painful vesicles surrounded by a rash appeared on the man's torso, lower limbs, face and glutes.

By July 5, the vesicles had further spread and evolved into pustules - small bumps on the skin - at which point the man went to the emergency department at the San Marco University Hospital in Catania, Italy and was subsequently transferred to the Infectious Diseases unit.

There, he was tested for monkeypox and subsequently returned a positive result.

The patient was also screened for multiple STIs. He tested positive for HIV-1, and the researchers said that 'given his preserved CD4 count, we could assume that the infection was relatively recent.'

The patient had taken an HIV test in September 2021 and returned a negative result.

After recovering from Covid-19 and monkeypox, the patient was discharged from hospital on July 11 and sent home to isolate.

By this stage, his skin lesions had healed, after crusting over, leaving a small scar.

'This case highlights how monkeypox and Covid-19 symptoms may overlap, and corroborates how in case of co-infection, anamnestic collection and sexual habits are crucial to perform the correct diagnosis,' the researchers, from the University of Catania, said in their case report.

'To note, the monkeypox oropharyngeal swab was still positive after 20 days, suggesting that these individuals may still be contagious for several days after clinical remission,' the report said.

The researchers added: 'As this is the only reported case of monkeypox virus, SARS-CoV-2 and HIV co-infection, there is still not enough evidence supporting that this combination may aggravate patient's condition.

'Given the current SARS-CoV-2 pandemic and the daily increase of monkeypox cases, healthcare systems must be aware of this eventuality.'

This comes after a report suggested the monkeypox virus could be mutating at a rate faster than scientists predicted.

Officially declared a global health emergency by the World Health Organization (WHO), monkeypox has spread to dozens of countries in what is being termed an 'extraordinary event' by experts.

There have been nearly 32,000 monkeypox cases worldwide since the latest outbreak started in May. More than 3,000 patients have been diagnosed in the UK and 10,000 in the US.

As part of new research by Nature Medicine, scientists looked at the DNA strain of the current monkeypox virus and found it bore close relation to a strain behind a 2018-19 outbreak in Nigeria.

Scientists found that the virus mutated 50 times since the 2018-19 outbreak, and this mutation could help explain why the virus is spreading in parts of the world where it should be struggling more.

So far, the UK has diagnosed 3,081 people with the tropical disease.

The vast majority of infections so far have been found in gay or bisexual men, but the virus can be spread or caught by anyone.

Monkeypox can take up to three weeks for monkeypox-infected patients to develop any of its tell-tale symptoms.