The governor lamented the worsening security situation in the country and vowed to keep going head-on to defend residents of the State. 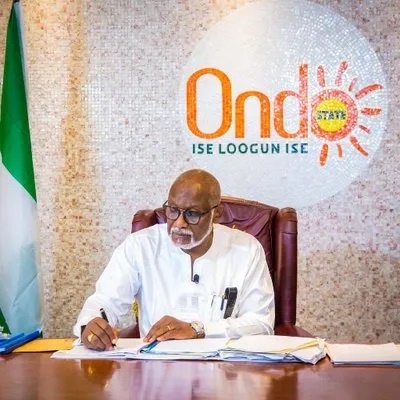 President Muhammadu Buhari has been urged to allow the Amotekun security network and other state security outfits to bear arms.
Governor Oluwarotimi Akeredolu of Ondo State made the call on Wednesday during the inauguration of the newly built office complex at the Ondo State Oil Producing Area Development Commission, OSOPADEC, in Oba-Ile, Akure.
Akeredolu said the government should permit Amotekun to use heavy weapons to secure the lives and properties of the people of the South West, just like it allowed non-state actors hired to secure the oil pipelines in the Niger Delta region to bear arms.
The governor lamented the worsening security situation in the country and vowed to keep going head-on to defend residents of the State.
He said: “Most of the people and even some of my colleagues didn’t really understand my position on the oil pipeline surveillance contract.
“I have no issue with the Federal Government awarding surveillance contracts to anybody. It is the Federal Government’s money. They can use it anyhow they want.
“Here, we are spending our money on Amotekun. And what I said in my statement titled ‘Who Actually Needs Weapons’ was that the Federal Government should allow Amotekun to carry sophisticated weapons like those whom they awarded pipeline surveillance contracts.”
Top Stories