It was gathered that the duo were returning from somewhere when they boarded a motorcycle to Kilani’s residence on Asabi Street, Mushin. 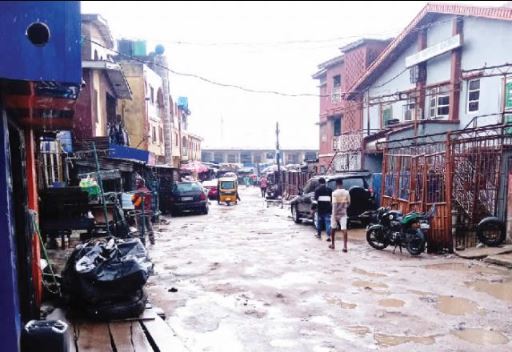 Toheeb Kilani, a factory worker, is currently on the run, PUNCH Metro reports.

The man has gone into hiding after allegedly stabbing his colleague, Emmanuel Ojo, to death during an argument over N300 in the Mushin area of Lagos State.

PUNCH Metro reports that the duo were returning from somewhere when they boarded a motorcycle to Kilani’s residence on Asabi Street, Mushin.

After the motorcyclist conveyed Ojo and Kilani to the destination, he received payments from the friends and gave them N300 change to share between themselves.

However, in the process of sharing the money, it caused an argument that degenerated into a fight. During the scuffle, Kilani brought out a cutter and allegedly used it to stab Ojo in the neck.

After perpetrating the crime, Kilani fled the scene, abandoning the victim, who was unconscious and bleeding on the ground.

It was learnt that some good Samaritans rushed Ojo to a nearby hospital where the doctor on duty declared him dead on arrival.

Ojo’s corpse was later handed over to policemen from the Olosan police station.

During a visit to the area, an apprentice, Stanley Ufon, said the cause of the fight was N300, adding that the fight started after they got down from the motorcycle.

Ufon said, “The motorcyclist didn’t have change, so he gave them N300 to share between themselves and left. The money caused an argument and they started fighting each other.

“One of the two brought out a cutter and stabbed the other person. The suspect realised what he had done and fled but we tried to rush the victim to the hospital, but he died on the way.”

A Point of Sales operator in the area, who gave his name only as Collins, said the boys were close friends who worked in a factory at Fatai-Atere Street, Mushin, adding that efforts made by people to separate them proved abortive.

“After stabbing his friend, he went home and was later informed that his injured friend died after drinking water,” Collins said.

An elderly woman, who sells alcohol drinks packaged in sachets, spoke to our correspondent but refused to give her name for security reasons, noted that people in the area initially thought Kilani and Ojo were playing with each other.

She said, “My neighbour thought they were playing but when it got rough, she asked them to leave the premises of her shop.

He said, “The incident happened around 1pm at Ashabi Street, Mushin, where a fight broke out between Toheeb Kilani and 20-years-old, Emmanuel Ojo.

“They had a misunderstanding and Kilani stabbed Ojo with an object and he collapsed. Ojo was rushed to the general hospital where he was confirmed dead by the doctor on duty.

“The suspect escaped and efforts to apprehend him are still ongoing.”

PUNCH Metro had reported cases of misunderstanding degenerating into scuffles that claimed the lives of people in the state.

Recently, one Monday Nnime was arrested for allegedly stabbing his brother, John, to death during a misunderstanding bordering on N1500.

Reacting to these developments, a psychologist, Dr Matthew Olasupo, said conflict was bound to happen in a relationship, adding that every party involved in a conflict must be ready to shift grounds to achieve a win-win resolution to solve the problem.

He said, “There won’t be a lasting peace if either of the parties is thinking of winning it all. To get a quick and amicable resolution when conflict happens, there must be a desire for the parties to think towards the win-win solution where each party involved must be willing to shift grounds a little bit.

“Having the above basic understanding will go a long way in helping the society to resolve conflicts that result in loss of lives and property.”