879 inmates, including 64 high-profile Boko Haram terrorists fled the facility during the jailbreak. 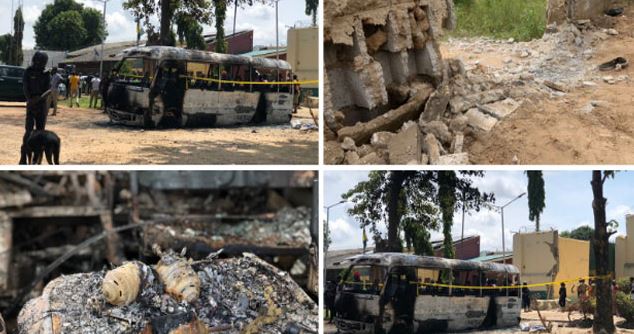 422 inmates who fled the Kuje Medium Custodial Facility, Abuja during the July 5, 2022 prison break are still on the run.

879 inmates, including 64 high-profile Boko Haram terrorists fled the facility during the jailbreak.

The Nigerian Correctional Service’s spokesperson, Umar Abubakar, had said five persons, including an officer of the Nigerian Security and Civil Defence Corps and four inmates, died during the attack.

On July 14 reported that the House of Representatives Committee on Correctional Service said the NCoS had recaptured 421 inmates with 454 still at large.

According to media reports, between July 15 and October 3, 2022, no fewer than 32 out of the 454 escapees have been recaptured.

A security expert, Chidi Ojeme, in an interview with our correspondent on Monday, said the slow recapturing of fleeing inmates calls for worry, noting that they are capable of carrying out future attacks.

Although Ojeme commended the security agencies for the pushback in recent times, he, however, said much is still needed to be done to ensure that the fleeing inmates are arrested.

“But the fact that these fleeing inmates have not all been recaptured calls for worry. It is an indictment of the country’s ability to take on serious and desperate situations at a time. They are capable of carrying out future attacks,” Ojeme said.

Another security expert, Nnamdi Anekwe-Chive, described the inability of relevant agencies to recapture all the fleeing inmates as an indictment.

“If we had proper security architecture in place for tracking and apprehending suspects, especially Immigration and Customs, by now, we would have recaptured almost all fleeing inmates,” he said.

The NCoS spokesperson, Abubakar Umar, in an interview on Monday, said the hunt for the fleeing inmates is still ongoing and very soon, all of them will be recaptured.

Umar said, “Except for any inmates that escaped from our custody and remain prisoners in their homes, they will be caught when they step out because every detail about them is in the system.”

When asked how many have been re-arrested due to synergy with security agencies and deployment of e-technology in the last 30 days, the spokesperson said, “Recapturing is an ongoing process.

“We are synergising with other security agencies to make sure that every inmate is recaptured and put where they are supposed to be. Very soon, we will address the press on the recapturing made so far.”