The victim said he was at home when some men in military uniform invaded his premises and beat him up, adding that he sustained varying degrees of injury during the attack. 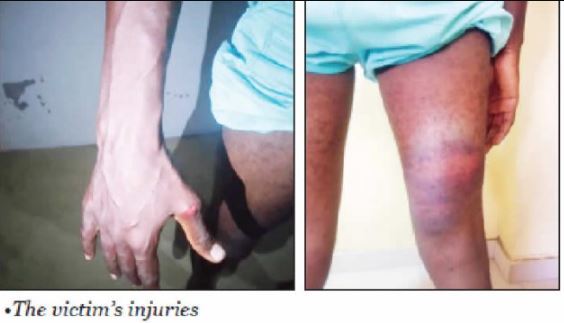 Dike Ogbunugafor, a 43-year-old man, has made startling allegations against a naval rating.

He accused a naval rating, Fali Amin, of mobilising naval personnel to brutalise him at his residence in Agale community, in the Badagry area of Lagos State.

The victim said he was at home when some men in military uniform invaded his premises and beat him up, adding that he sustained varying degrees of injury during the attack.

He said, “Around 6pm on Friday, September 23, 2022, I was driving to my farm to feed my fishes, but a saloon car was obstructing the access road leading to the farm. I had to manoeuvre around it and parked to look for the owner.

“I was directed to three guys drinking by a bar. I approached them, greeted them and asked them to adjust the position of the car. The owner of the car said since I was able to get there, then there was no issue. I explained that I had to manoeuvre around the car to do so. He eventually agreed to move it after finishing his drink.

“After concluding in the farm, I was driving out in reverse when I saw that the car was still there. I repeated this manoeuvre around the car, parked and picked up my phone to record the car with the intention of reporting to the estate association.

“I entered my car and went home. Around 8pm, someone knocked on my door and as I opened the door, a man grabbed me, while others who came out of hiding, descended on me. They slapped, punched, kicked, and dragged me away. The naval ratings were led by Fali Amin.”

The victim narrated that the naval ratings seized his phone and placed him in handcuffs, as they took him to the naval formation at Akarumo, where he was tortured overnight.

He said, “I started screaming and noticed six men putting on military camouflage with assault rifles, and three others in mufti.

“I was warned that by morning, they would make my arrest official, and I would be sent to the headquarters as a terrorist, with terrorism-related charges.

“I did not insult, assault, nor commit any national-security-threatening offence to justify this attack aside from using my phone to take a video of a car obstructing access to a road.”

Dike’s 83-year-old mother, Grace, said the men she saw wore military camouflage and were hitting her son with rifles, belts and other objects, adding that she heard her son screaming in pain.

She said, “I begged them to leave my son, but they did not listen to me and after some time, they handcuffed him and took him away. It was later the next morning that they set him free after beating him with different objects.”

Reacting to the incident, a legal practitioner, Todimu Ige, said military men did not have the power to torture people, adding that the reverse was the case in Nigeria.

“This is due to the fact that successive governments have not been proactive in enforcing sanctions for issues such as this,” Ige said.

The Information Officer, Western Naval Command, Edward Yeibo, said he was not aware of the incident.

“I will find out if there was any such thing and get back to you,” he added.