Issue A Disclaimer Against Reno Omokri's Post, His Support Might Mislead People To Believe His Posts As Representating The Party's View - Olisa Metuh Tells PDP 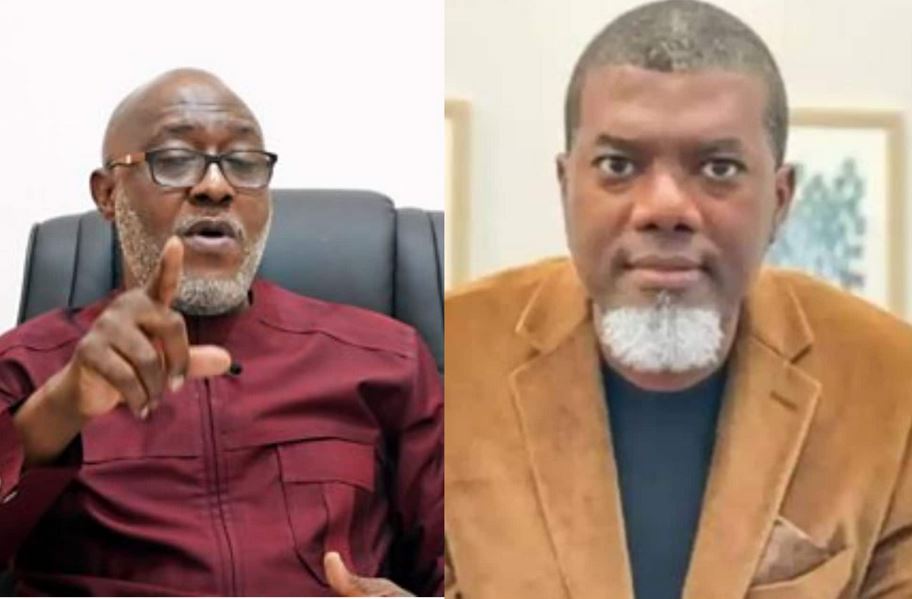 Former National Publicity Secretary of the People's Democratic Party, Olisa Metuh has called on the party to issue a disclaimer against the posts made on social media in support of Atiku Abubakar by former presidential aide, Reno Omokri.

''You rage against Tinubu. You insult his ethnicity (who are the most accommodating people in Nigeria and perhaps Africa). You accuse him of using MC Oluomo. You say Obi is far better than Tinubu. You say Obi will turn Nigeria into paradise. Yet, you remain in Lagos and refuse to leave Lagos for the paradise that Obi created in Anambra! The only reason I am against Tinubu is because as a drug lord, he can be blackmailed by foreign intelligence services. Otherwise, he performed as Lagos Governor. If you maintain that Obi did better than Tinubu, prove it by packing your kaya and relocate to Anambra!'' 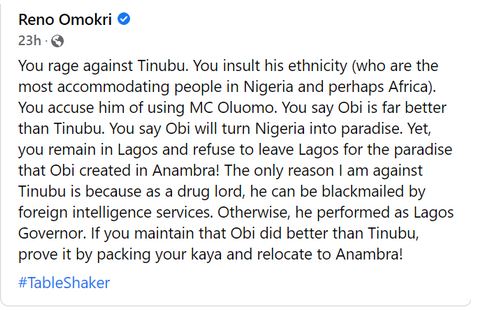 Reacting to this, Metuh stated that while Omokri is not a member of the Presidential Campaign team, his closeness to PDP's Presidential candidate Atiku Abubakar and his open support for the party may mislead people to believe his posts represents the views of the Party.

He also said that while the former presidential aide had agreed on issue-based campaign, he is reneging on the promise he made.

The time has come for the Peoples Democratic Party to issue a disclaimer to Reno Omokri's posts. Whilst he is not a member of the Presidential Campaign team, his closeness to the Presidential candidate and his open support for the party may mislead people to believe his posts as representating the views of the Party.

There is no way any responsible or respectable democrat can condone such insensitivity. We did not join politics to mock or disparage any set of individuals, least of all a whole tribe.

The founding fathers of the PDP had noble ideals and its ideals and values should not be desecrated by any individual, on the altar of a false strategy to engineer hatred against any tribe or stroke an ethnic contest.

I spoke with Reno yesterday morning and he agreed on issue based campaign only, this is a complete negation of that promise.

We all should insist on an issue based campaign.'' 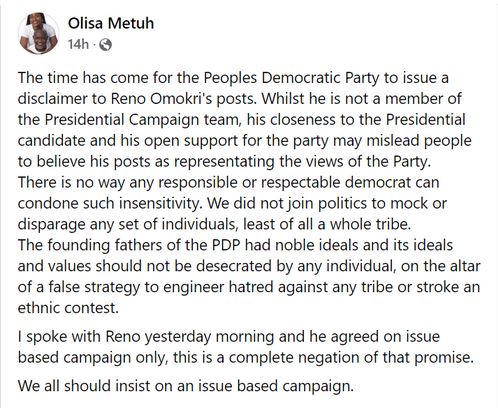