The PDP Publicity Secretary in the state, Chika Nwoba, stated this in an interview with our correspondent on Thursday. 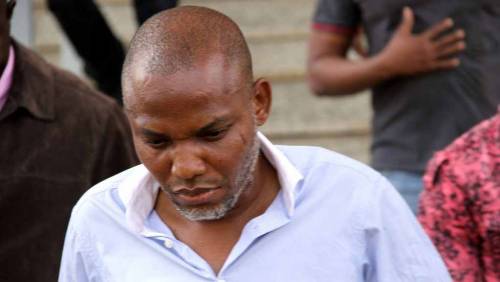 The Ebonyi State Chapter of the Peoples Democratic Party has reacted to the Court of Appeal order acquitting and discharging Nnamdi Kanu, leader of the Indigenous People of Biafra.
The Ebonyi PDP hailed the decision of the Appeal Court.
The PDP Publicity Secretary in the state, Chika Nwoba, stated this in an interview with Punch on Thursday.
He said, “The release of Kanu came to me as one of the few good pieces of news I have received this year.
“It goes a long way to portray our judiciary as not a conquered institution against the general view of it has always been locally and internationally.
“The release of Kanu by the Appeal Court will relieve the South East of what today seems to be an obdurate new order whose embrace was compulsive.
“The vexatious sit-at-home culture will come to an end. Many ill-informed things occasioned by his incarceration will end, and we may begin to enjoy our peace of mind again.
“It’s very important that Federal Government releases him as ordered by the Court.
“APC-led Federal Government is known for disobedience of court judgements. This one should not be disobeyed due to how dire the need to release the captive is.
“Members of the public should pressure the government to do the needful immediately. So, it’s a good development: the release of Kanu.
“If not for any other thing, it’ll return the South East to its former place of economic boom which was truncated by this incident of incarceration of Nnamdi Kanu. I welcome him back to the free society.”
Also, a socio-political organisation in Igbo land, the Alaigbo Development Foundation, hailed the judgement.
Its Secretary-General, Chief Abia Onyike, said, “It is a positive development. It shows that a peaceful resolution of the Igbo Question in Nigeria is feasible.”
An elder stateman in Ebonyi State, Ichie Chukwujekwu Orji, said, “The cause Nnamdi Kanu is pursuing is a cause everyone likes.
“And because of the type of constitution that was foisted on the people of this country with all the lies being told against us by our leaders, let us go back to the 1963 constitution and start enjoying this country once more. I hail the judgement.”
Top Stories