Idris also ordered “the withdrawal” of the entire shift on duty at the time of the incident. 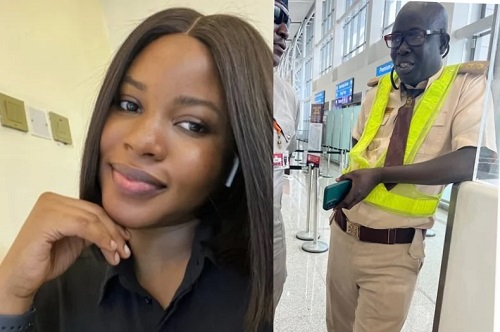 An investigation has been ordered by the Comptroller-General of the Nigeria Immigration Service, Isah Idris following a case of extortion perpetrated by his officers at the Murtala Muhammed Airport, Ikeja, Lagos.
Recall that a Twitter user going to Dubai had alleged massive extortion of under-40 Nigerians travelling to the Gulf city.
According to Punch, Idris also ordered “the withdrawal” of the entire shift on duty at the time of the incident.
This is according to a statement signed late Monday by the Comptroller-General, titled ‘Alleged misconduct at the Murtala Muhammed International Airport, Lagos.’
In a tweet on October 14, 2022, a user with the handle name @darbyy alleged that she paid the sum of N10,000 to the immigration officers before her passport was stamped.
This was despite presenting her UAE visa at the immigration booth.
She also alleged that the extortion scheme is targeted at Nigerians perceived to be below 40 as older travellers do not face such treatment.
“It was then I noticed all the people they had brought to this (separate) aisle were young and going to Dubai. It was all a plan to use fear to exploit us. The couple got their passport stamped after paying. Oga turned to me and said “it’s in your hands. How much do you have?” wrote the tweep.
Responding to the development, the NIS in a statement late Monday said, “Following the recent allegation by a Dubai-bound Nigerian citizen of sharp practices by some Personnel during passenger clearance which occurred about 3 weeks ago at the Lagos Airport, the Comptroller General of Immigration, Isah Idris, MFR, has ordered an investigation into the matter.
“Furthermore, he ordered the withdrawal of the entire shift on duty at time of the incident to allow unhindered investigations. The Comptroller General wishes to use this opportunity to reiterate his administration’s zero tolerance for sharp practices and that such would be met with stiff sanctions to any staff found involved.
“The CGI hereby encourages members of the public to feel free to contact the Service through its various public communication channels, including twitter and Facebook handles @nigimmigration to lay complaints and report any misdemeanour by any member of staff for appropriate sanctions.”
Top Stories