The suspects were arrested in Oluyole Local Government Area after the security operatives received information about the bones hidden in the ceiling of Kehinde's house. 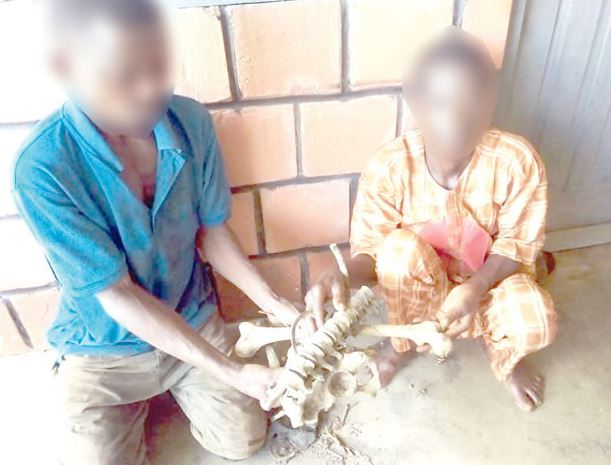 The suspects were arrested in Oluyole Local Government Area after the security operatives received information about the bones hidden in the ceiling of Kehinde's house.

Kehinde, who disclosed that the bones were picked from the remains of a female deceased person, however said that he and his partner had yet to decide what to do with them so they kept them in the ceiling of his house.

But Dauda, who admitted sighting the female body under a mango tree with others, denied picking the bones with Kehinde, saying that he never knew that the second suspect went back to where the body was seen.

The OSST Commandant, Olusegun Idowu, who briefed the Nigerian Tribune about the arrest, said that prior to the arrest, the team was informed of how Dauda, who allegedly got drunk in a beer parlour, started boasting that he would soon become rich.

"Community members who heard of the boasting started wondering what he meant. They also noted the stealing of chickens and other farm products in Bare Community," Idowu said.

"It was some of his friends who felt he was making jest of them when they were arrested for stealing chickens that exposed him, saying that what he was involved in was more terrible than what they did."

In an interview, Dauda, who said he hails from Popoyemoja but lives at Bare Community, said: “What happened was that in March 2021, I went to Ajanla Community to work. Kehinde and two other boys went with me. We were on our way back when we stopped by a mango tree to pluck some. One of the boys with us said that he was hungry.

"When we got to the mango tree, the boy ran to meet us and invited us to see what he had discovered. When we got there, we saw a decomposing human body and I told them to let us go home, and we left there immediately.

"Since then, I had not been in the area and did not know anything until a few days ago when a boy ran to me and said that someone said I had human bones in my house while I wanted to expose those stealing chickens. I called Kehinde and asked him if there were human bones with him, and he said no, asking me where he would find such when he could not exhume his dead father’s bones.

"The following day, on my return from a meeting of OPC members, I heard of the claim again. I asked Kehinde and he denied it.

"To my surprise, I heard this morning that Kehinde said that we both went to take the bones. I didn’t know anything about it. In fact, the bones were found with him and not in my house.”

However, in Kehinde’s confession, he mentioned Dauda, saying that they both picked the skull and bones of the decomposing body.

He also said that he didn’t know how the skull disappeared from the room he initially kept the bones, which made him to hide other bones in his ceiling.

"It is true that human bones were found with me. I hid them in the ceiling. One day, I went to farm at Ajanla Community with Dauda. We also had Falafolo and Apesin with us. On our way back, Falafolo saw a decomposing dead body and ran to meet us at the road side. When we got to the spot where he found the body, Dauda and I picked the bones and put them in a cellophane bag. We also picked the skull. When we got home, I told Dauda that I could not keep the bones with me, asking him what to do with it,"

"We decided to put the sack in a room opposite my wife’s own. After seven days, I went to check back but could not find the skull. Falafolo was angry. We wondered who must have come for the skull and I thought that it could not have been behind Dauda.

"When I called him to ask, he said he did not know anything about it. He rained curses on whoever must have done it and we decided to put the bones in the ceiling. That’s the main reason the bones were with me. We didn’t mean to use them for anything."

"Since I came to this world, I  have never sold human bones. We didn’t even have the identity of the deceased. We just found the body by a mango tree. It was not buried; it was just thrown inside the bush. We could see the cloth the dead person was putting on. It was Ankara with red colour. The deceased was a female."

The Commandant said that the suspects had been handed over to the Toll Gate Division of the state police command.